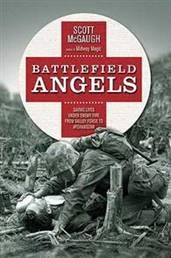 OSPGEN5151
Battlefield Angels (HC)
$24.95 SRP
Author, journalist, and USS Midway Museum spokesman Scott McGaugh reveals the riveting stories of the men and women who save lives on the front lines in Battlefield Angels, the first book about battlefield medicine in the US military.
Told from the point of view of the unsung heroes who slide into bomb craters and climb into blazing ships, this unique look at medicine in the trenches traces the history of the military medical corps and the contributions it has made to America’s health, for example, how the military medical corps pioneered the ambulance concept, emergency medevac helicopters, hospital designs, and contagious disease prevention.
McGaugh also details how the military medical corps has adopted medical science discoveries, field tested them in battle, adapted them, and proved their value. 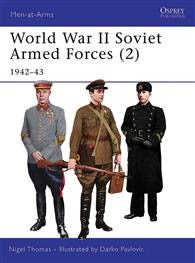 OSPMAA468
World War II Soviet Armed Forces (2)
$17.95 SRP
In this second volume of a three-part series on the Soviet Armed Forces in World War II, author Nigel Thomas turns his attention to the mid-war period.
Focusing on the uniforms and organization of Soviet troops during the campaigns of the Caucasus, Stalingrad and Kursk, this book offers a detailed breakdown of all the armed forces which conducted the valiant defensive campaigns, including the army, air force, paratroopers, navy and NKVD troops.
It also covers equipment and insignia and the changes brought about by the new regulations of 1943. 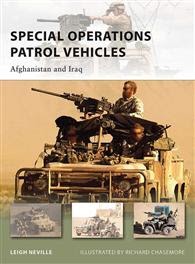 OSPNVG179
Special Operations Patrol Vehicles
$17.95 SRP
The patrol vehicles used by Special Operations Forces in Afghanistan and Iraq vary quite dramatically between the theaters as well as amongst the Coalition members, and have been developed and upgraded to meet the demands of the deployment.
Covering all the major Coalition nations, Leigh Neville continues his look at the elite forces deployed in Operations Enduring Freedom and Iraqi Freedom, with this analysis of their vehicles. Tracing the evolution of the vehicle types, from their historical precedents, through their designs to their operational developments, he discusses their advantages and disadvantages, along with their tactical employment. From the mine-protected vehicles used to counter the IED threat in Iraq, the use of Strykers as armored raiding platforms by the US Rangers, to the civilian vehicles adapted for military service by both Coalition troops and Private Military Contractors in the regions, this book uses rare in-theater photographs and color artwork to show the variety and inventiveness of the patrol vehicles being used in combat today. 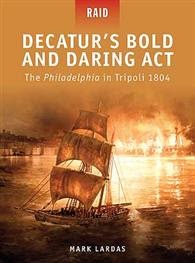 OSPRAID022
Decaturs Bold and Daring Act
$18.95 SRP
On a dark night in 1804, Lt. Stephen Decatur and a team of hand-picked men, slipped into Tripoli harbor in a small boat. Their target was the USS Philadelphia.
Captured by the Barbary pirates four months previously, the Philadelphia had been refitted to fight against her former masters. Decatur’s mission was to either recapture the ship, or failing that, burn her to the waterline.
This book recounts one of the greatest raids in American military history, an event that propelled Stephen Decatur to international renown, and which prompted Horatio Nelson to declare it ‘the most bold and daring act of the age’. 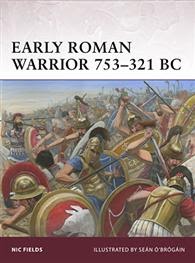 OSPWAR156
Early Roman Warrior 753-321 BC
$18.95 SRP
The prototypical ‘Roman Legionnaire’ often seen on television and in movies is actually the product of nearly a millennium of military development.
Far back in the Bronze Age, before the city of Rome existed, a loose collection of independent hamlets eventually formed into a village. From this base, the earliest Roman warriors launched cattle raids and ambushes against their enemies. At some point during this time, the Romans began a period of expansion, conquering land and absorbing peoples. Soon, they had adopted classical Greek fighting methods with militia forming in phalanxes.
This book covers the evolution of the earliest Roman warriors and their development into an army that would eventually conquer the known world. 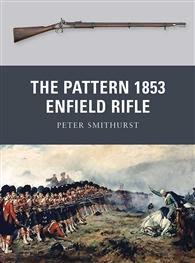 OSPWPN010
The Pattern 1853 Enfield Rifle
$17.95 SRP
The Pattern 1853 Enfield Rifle was the first rifled firearm issued to every soldier in the British Army, and gave the infantry a revolutionary increase in firepower.
First issued in 1853, the Enfield proved itself worthy during both the Crimean War and the Indian Mutiny, where its long range, durability, and interchangeable parts made it a perfect campaign rifle. However, it was during the American Civil War that the Enfield saw the greatest use, with over a million rifles being sold to the armies of both the North and South. T
his title takes an in-depth look at the design, the history, the mechanics, and the use of one of the most important firearms of the 19th century.
Posted by ACD Distribution at 3:55 PM