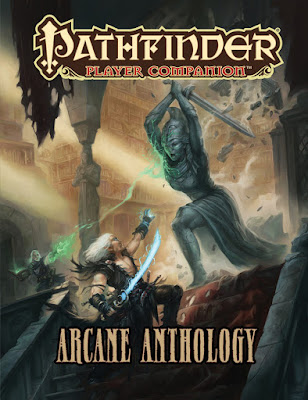 If knowledge is power, then the arcane knowledge presented in Pathfinder Player Companion: Arcane Anthology represents significant sources of potential might! From magus and wizard spellbooks and alchemist’s formulae to eldritch research from bards, bloodragers, sorcerers, and witches, inside this volume you’ll find spellbooks copied and adapted from the writings of the mightiest arcane casters in the history of Golarion.

In addition to new spells and secrets of spell preparation found in spellbooks such as the Analects of Aroden, the Wisdom of Jatembe, and the Runes of Wealth, this Player Companion also includes archetypes, feats, and character options for PCs of any character class. 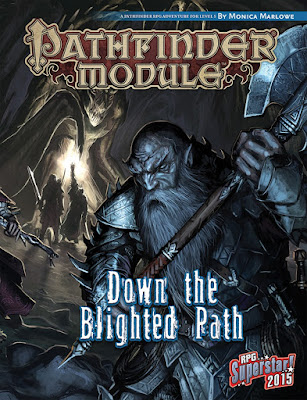 Two centuries ago, Delbara Axebringer; a mighty warrior and dwarven leader, slew the necromancer Audalot Karexin, but spared his young apprentice Zohiira, and for 200 years the bitter survivor brooded and plotted her revenge. Now, descendants of the Axebringer clan are vanishing - dragged screaming into the darkness by the animated bodies of their own fallen kin. With no great champions left among their family, the Axebringers turn to outside heroes to break their family curse. What mysteries lie sealed within Delbara Axebring’s abandoned ancient fortress? And what challenges block the blighted path winding through the Darklands beneath Golarion’s surface?

Down the Blighted Path is a deluxe adventure for 5th-level characters, and includes 64 action-packed pages of exciting battles, supernatural mysteries, and new monstrous foes, plus a gorgeous double-sided poster map featuring an overview of the dwarven trading post of Davarn and a miniatures-scale battlemap! 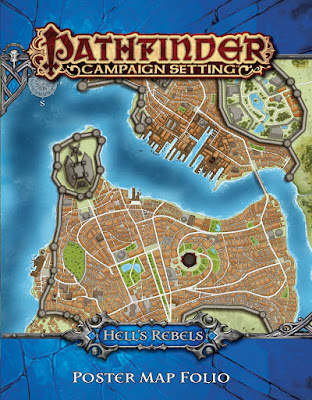 The city streets run red with revolution! Map out your campaign on these three giant poster maps designed for use with the Hell’s Rebels Adventure Path.

This map folio contains three huge poster maps that depict two cities central to the campaign. The city of Kintargo, the setting for most of the Adventure Path, comes to life in two of these maps.

One poster map is clearly illustrated to provide the Game Master with a useful tool to plot out the movements of the enemy forces throughout the city, while the second map of Kintargo is lavishly illustrated and suitable for a player handout. The third poster map depicts Vyre, the City of Masks - a debauched city of vices and secrets.

Whether you’re running the Hell’s Rebels Adventure Path or any other urban fantasy campaign, these maps are the perfect resource for your game. 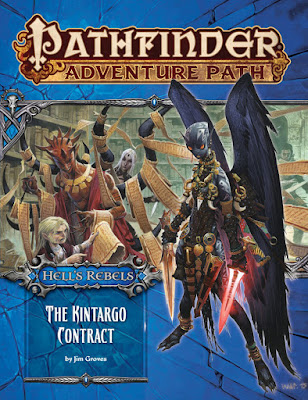 The Silver Ravens have defeated Paracount Barzillai Thrune and liberated the Silver City of Kintargo, but unless steps are taken to protect what they’ve won, it’s just a matter of time before the rulers of Cheliax respond with open war - a war that would likely destroy Kintargo. The key to Kintargo’s defense lies in the lines of a single sprawling scroll recovered from the Church of Asmodeus - the Kintargo Contract. Within this contract’s rules and stipulations lie numerous loopholes and opportunities to use Cheliax’s own love of law against them; to use the Kintargo Contract to secure not just the city, but the surrounding region’s freedom from the infernal machinations of House Thrune and the Church of Asmodeus. Yet as the heroes set about securing these loopholes, an old menace from Kintargo’s past seizes the opportunity to strike while the city still reels from its recent upheavals. Before Kintargo can be sheltered from Cheliax, the heroes must save her from a monster of her own making!

“The Kintargo Contract” is a Pathfinder Roleplaying Game adventure for 13th-level characters. The adventure continues the Hell’s Rebels Adventure Path, an urban- and political-themed campaign that focuses on a rebellion against one of the Pathfinder Campaign Setting’s most infamous nations - devil-haunted Cheliax. Several new monsters, an investigation into the nature of diabolic contracts, an article about the winged folk known as the strix, and a brand new Pathfinder Journal round out this volume of the Pathfinder Adventure Path! 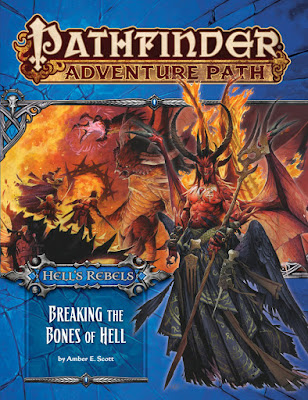 With the recovery of the Kintargo Contract and numerous alliances in place, the so-called Silver City of Kintargo and its surrounding region of Ravounel is now protected from invasion by Cheliax. The heroes of Kintargo are ready to sign formal treaties and accords with Cheliax to secure Kintargo’s independence, yet enemies made during the region’s liberation remain active and bear grudges. Worse, the one-time despotic ruler of Kintargo, Barzillai Thrune lives on in the depths of Hell, and his plans for the region have only been slowed. Strange manifestations of ghostly spirits and infernal hauntings spread through Kintargo, and before long, the truth cannot be ignored; the high-inquisitor’s death has only made him more powerful, and the secret to stopping him forever lies hidden in the roots of Hell itself! Can Kintargo’s heroes brave the depths of the pit to ensure the city is finally and forever safe from Barzillai Thrune?

“Breaking the Bones of Hell” is a Pathfinder Roleplaying Game adventure for 15th-level characters. The adventure concludes the Hell’s Rebels Adventure Path, an urban- and political-themed campaign that focuses on a rebellion against one of the Pathfinder Campaign Setting’s most infamous nations - devil-haunted Cheliax. Several new monsters, an exploration of the faith and secrets of the archdevil Mephistopheles, suggestions for how to continue your Hell’s Rebels campaign beyond the events of this Adventure Path, and a brand new Pathfinder Journal round out this volume of the Pathfinder Adventure Path! 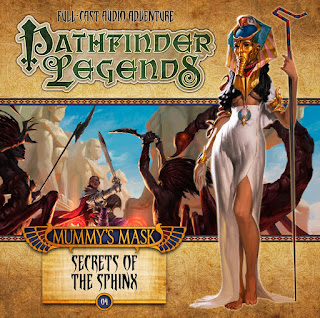 Deep in the Osirian desert stands the blank-faced monument known as the Sightless Sphinx. In search of the stolen mummy of Chisisek, the architect of the flying tomb of the Sky Pharaoh Hakotep I, Ezren, Harsk, Merisiel and Valeros track the cult of the Forgotten Pharaoh to its secret headquarters inside the sphinx. There they confront monstrous mercenaries and servants of the demon lord Areshkagal before finally confronting the masked cultists and their leader, the Forgotten Pharaoh, who has been possessed by a fragment of Hakotep’s soul.

Pathfinder Legends audio dramas adapt the world and characters of the best-selling Pathfinder Roleplaying Game. Each episode runs about two hours and features a cast of professional actors, sound effects, and music that immerse you into the dangerous and exciting world of Pathfinder! 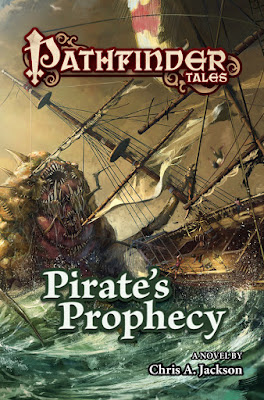 Hell on the High Seas!

Captain Torius Vin has given up the pirate life in order to bring freedom to others. Along with his loyal crew and Celeste, the ship’s snake-bodied navigator and Torius’s one true love, the captain of the Stargazer uses a lifetime of piratical tricks to capture slave galleys and set the prisoners free. But when the crew’s old friend and secret agent Vreva Jhafe uncovers rumors of a terrifying new magical weapon in devil-ruled Cheliax; one capable of wiping the abolitionist nation of Andoran off the map, will even their combined forces be enough to stop a navy backed by Hell itself?

From award-winning novelist Chris A. Jackson comes a tale of magic, mayhem, and nautical adventure, set in the vibrant world of the Pathfinder Roleplaying Game!

Posted by ACD Distribution at 2:30 PM No comments:

New from IDW Publishing! Back To The Future: An Adventure Through Time! 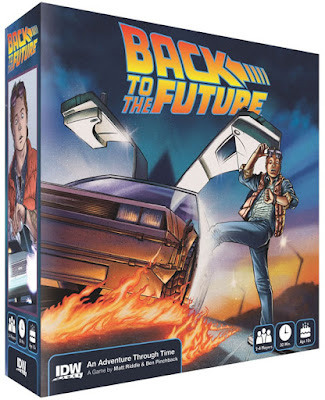 Fire up the DeLorean and prepare for 1.21 Gigawatts of fun! In Back To The Future: An Adventure Through Time, 2-4 players compete to move Doc Brown’s time-traveling DeLorean between three timelines (1955, 1985, and 2015) in order to make sure that key events from the movie’s plotline take place.

Maneuver key characters like Marty McFly and Biff Tannen through the different timelines, ensuring they meet at just the right moment to set off iconic scenes.

The player who does the best job repairing the timeline wins.

Email ThisBlogThis!Share to TwitterShare to FacebookShare to Pinterest
Labels: back to the future, board game, board games, IDW, march 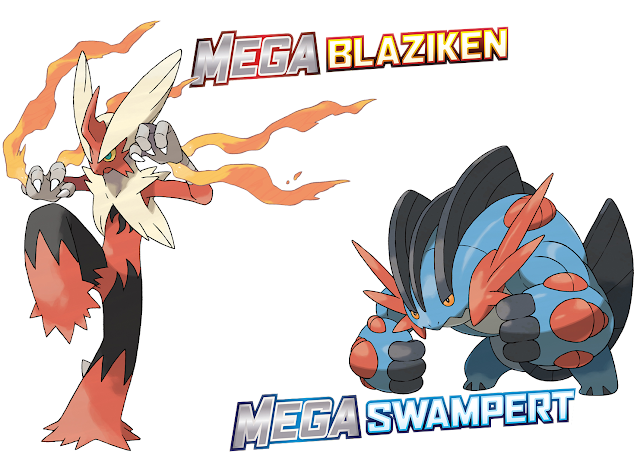 (Images for character reference only)

Power up your Pokémon TCG collection with 3 booster packs, and show your Pokémon pride with 1 of 2 awesome collector’s pins featuring Mega Blaziken or Mega Swampert!

BREAK Evolution is the newest way to power up your Pokémon and this box contains not 1 but 3 new Pokémon BREAK, plus a fantastic oversize card! Make a break for victory with the Pokémon TCG: BREAK Evolution Box today!

Our ACD Distribution Blog will resume on November 30th! 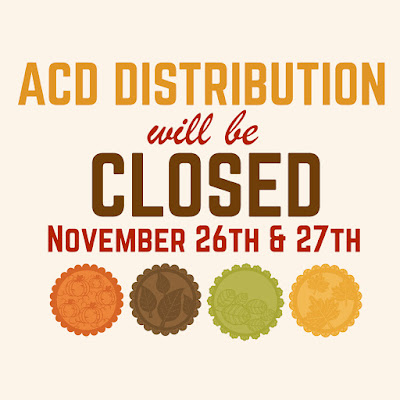 Posted by ACD Distribution at 2:00 PM No comments:

New Force of Will and Sword Art Online II products from Ultra PRO!

Coming in January!
Posted by ACD Distribution at 2:30 PM No comments: 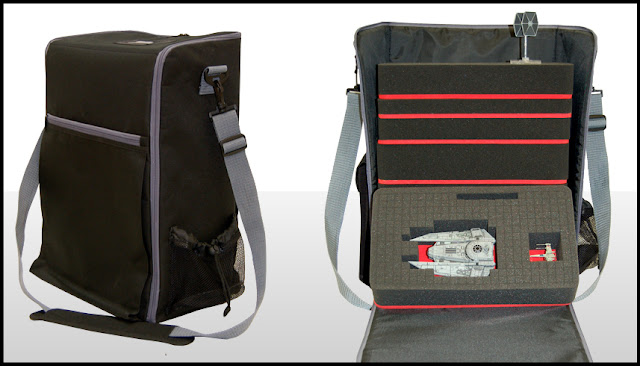 The GamePlus+ Gaming Bag is a high quality case which holds standard trays of gaming foam.

Though typically used for table top gaming and the transportation of miniatures, this bag also fits a variety of standard board game sizes as well. So no matter what your gaming preference, GamePlus+ has you covered!

Miniatures and Foam Trays are NOT included.

GamePlus+ Quality Foam Trays come in a variety of sizes to match any army!