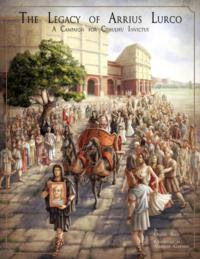 MRP0009
CoC: The Legacy of Arrius Lurco
$29.99 SRP
Several years ago a wealthy patrician, one of the owners of the Reds chariot racing faction, vanished in Crete. He was found weeks later wandering aimlessly with no memory of where he had been or what had happened to him.
Arrius Lurco returned home and tried to resume his life, but then the nightmares and erratic behavior began. What starts as an attempt to recover his lost memories soon becomes an epic struggle pitting investigators against sinister cults, inhuman minions, and the awesome powers of a Great Old One.
The Legacy of Arrius Lurco is a full four-part campaign for Cthulhu Invictus, set in Rome, Achaea (Greece) and Cyrenaica (Crete) illustrated by Alberto Guerra and written by Oscar Rios.
Posted by ACD Distribution at 12:53 PM