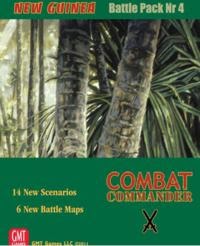 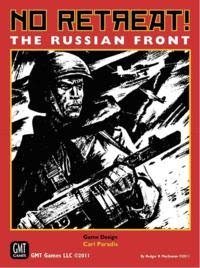 GMT1104
No Retreat! The Russian Front
$60.00 SRP
1-2 Players
Ages 12+
60 Minutes
No Retreat: The Russian Front is a new deluxe edition of the two-player Victory Point Games 2008 CSR Award Nominee wargame that retells the story of the titanic struggle between the invading armies of Nazi Germany versus Communist Russia during WW2 at a player-friendly and manageable level of scope and difficulty. This edition combines both the original game and its two extensions (Na Berlin! and No Surrender!) using deluxe components of “Twillight Struggle Deluxe Edition” quality. With only 40 Army/Front sized counters for the Tournament game, and 70 for the whole campaign, and with very low stacking, it’s a quick-playing yet realistic affair that favours the strategic and offensive-minded player.
Each turn is alight with intriguing on-board challenges plus the surprise of card hand Events as players vie to win in one of three different ways.
In a skillfully blended collation of classic hex-based wargaming and modern card-driven simulations, No Retreat: The Russian Front stays truly story-centric, providing the proper feel of sweeping maneuvers, exploitation and encirclements across the vast steppes and forests of Russia. With a simple-yet-innovative economic model, players will also feel the growing might and sophistication of the Russian’s Red Army, and the degradation of the once-invincible German Wehrmacht, over the epic four year sweep of time that this merciless campaign was fought.
Neither side can afford the disgrace of yielding an inch of ground to their hated foe, so your orders are: “No Retreat!” 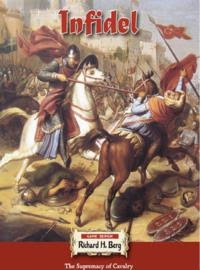 GMT1106
Infidel
$55.00 SRP
1-2 Players
120 Minutes
Infidel focuses on the major battles of the early Crusades era between the Christians and the Muslims. This is a period that saw cavalry reign supreme, and pitted the European heavy cavalry – armored “knights” - system against the Eastern/Turkish light cavalry tactics.
Infidel is designed for quick learning and easy play. Game rules are short, there are no “turns” - play is Continual, with ample opportunities to steal play from your opponent - and combat resolution is a single dieroll.  Playing time is about 1-2 hours, per battle.
Infidel is also GMT’s gift to the gamer who enjoys playing solitaire. The system is designed for both individual and face-to-face play without any loss in insight or Fun. Each game is a "paper time machine" that allows players to see what happened in these famous battles and why.
The battles include:
* Dorylaeum (1097): The Crusader line of march, including the people’s Crusade and Peter the hermit, as well as all the great 1st Crusade Leaders, are “ambushed” by Kilij Arslan and his crack Seljuk cavalry.
* Antioch (1098): The exhausted, starving and depleted Crusaders – they had few horses left – have just taken Antioch and are now faced with a large Turkish army, under Kerbogha, sent to retake the city.
* Ascalon (1099): The Crusaders, having seized Jerusalem, turn south to fend off the suddenly active large army of The Fatimids, with their crack Mamluk heavy cavalry.
* Harran (1104): Baldwin II of Edessa seeks to maintain control of his little kingdom in northern Syria, something Soqman, atabeg of Damascus, is not happy to allow. One of the first major Crusader defeats.
* Montgisard (1177): Saladin attempts to destroy a small army from the Kingdom of Jerusalem with an army more than five times its size. Though there are only 400 knights, the Crusaders are led by the remarkable Baldwin IV, The Leper King. The outcome - one of the greatest Crusader victories. See if you can carry off this stunning upset!
* Arsuf (1191):The classic battle between Richard I Lionheart and the Ayyubid Army of Saladin highlighting the major facets of each army in an unusual moving battle.
Each game of INFIDEL includes:
* Two 22” x 32”game-maps, backprinted
* 2 sheets of counters
* Rules Booklet
* Battle Book
* Charts and Play Aids
* 2 ten-sided dice 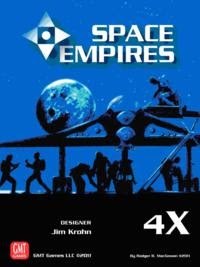 GMT1108
Space Empires 4X
$65.00 SRP
1-4 Players
Ages 12+
180 Minutes
Space Empires is a game in the finest tradition of 4X space games - eXplore, eXpand, eXploit, and eXterminate. Make no mistake. All four "X's" are included in this game. This is a wargame where the purpose of building your empire is not to feel good about your achievement, but to destroy your enemies and burn their colonies.
One difficulty in games of this genre is that they are often either overly simplistic or tediously detailed. Space Empires has been almost 20 years in the making and, during that time, many elegant solutions have been developed to keep the theme rich without a lot of rules. The game includes carriers and fighters, mines, cloaking, a very large technology tree, fifteen ship classes from scout to dreadnaught, merchant shipping, colonization, mining, terraforming, bases, shipyards, black holes, warp points, and non-player aliens, yet the rules are short and intuitive and the game can be finished on one sitting. This is NOT a game that is hard to get into. The playtest rules are only 8 pages long for the basic game and increase to 11 pages in length when the advanced rules are included.
Exploration is easy (well, easy for you, it is actually dangerous for your ships) and fun and reveals different terrain (such as asteroids and nebulas) which affect your movement and your combat. The map is mounted.
This is a game made by people who love the genre, but play other games too.
Components:
Four 5/8" counter sheets (704 counters)
One 22 x 34" mounted map
Rulebook
Scenario Book
Two Player aid sheets
One Pad of production sheets
Two 10 sided dice
Players and Playing Time:
1-4 Players
1-4 hours to play depending on the scenario 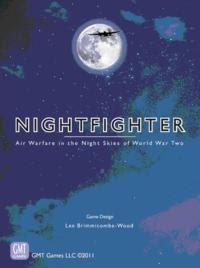 GMT1109
Nightfighter
$55.00 SRP
2 Players
Ages 12+
60 Minutes
NIGHTFIGHTER is a game of air warfare in the night skies of World War II.
The game details the development of night fighting tactics over Britain, the Reich and the Pacific. Using a brand-new 'blind' play system, an umpire controls the attacking forces and moderates the player defender, who must find, fix and destroy the incoming bombers.
Nightfighter will recreate the tactics of night fighting, from the 'cat's eye' fighting of the London night blitz to the Mosquito intruder operations at the end of the war. Scenarios include Freya AN interception in the Dunaja dark fighting zones, Himmelbett zones, the introduction of AI radar, Wilde Sau and Zahme Sau tactics. The evolution of electronic systems and countermeasures is modeled, including the use of 'Airborne Cigar', 'Window' and 'Serrate'.
There is a huge variety of aircraft in the game, from early Do217s and Ju88 fighters, to advanced fighters such as the He219. Rarities such as the Ta154, Me262B-1a and the Japanese J1N1 Gekko will be included. Schräge Music ('Jazz Music') oblique gun systems are modeled. The Allies get 'cat's eye' Hurricanes, Blenheims with AI Mk IV radar, Beaufighters with Serrate and various marks of Mosquito, including the NF30 with the advanced AI Mk X radar. Pacific operations will see F6F-5Ns and P-61A 'Black Widow' fighters engaging Japanese bomber threats.
Each aircraft unit in the game represents a single aircraft. Each hex on the map is roughly 1 mile across and each game turn is approximately a minute of real time. The map represents the width of the bomber stream and displays dark fighting areas, searchlight zones and searchlight beacons. Play times for the game are in the region of 1 to 2 hours.
The final game contents will comprise:
Combined rule and scenario book, 28 pages
One 1/2" counter sheet
One 5/8" counter sheet
One 11 x 17" umpire's map
One 22 x 17" player's map
One 11 x 34" playaid sheet/umpire's screen
Four 6-sided dice
Posted by ACD Distribution at 12:38 PM