Railways of the World Expansions 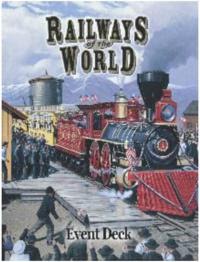 EGL101298N
Railways of the World Event Deck
$9.99 SRP
The Railways of the World Event Deck adds entertaining layers of complexity to the basic Railways of the World game and all of its expansions.
In Railways of the World, players build a track between cities and develop faster locomotives to deliver a limited supply of goods to those cities in an effort to become the most successful “Rail Baron”.
Adding the Event Deck to any of the games in the series is easy. Just create space for these card stacks near the game board—Event Deck, Future Event, Current Event and a Discard Pile. The Event Deck provides many interesting options and more cards than players can use during a single game, so the deck never feels repetitive.
Players can build their own custom decks: from a vicious deck filled with negative events to a more prosperous deck filled with positive events. The deck can also be tweaked for each of the expansion maps and there are even 4 blank cards for those who wish to create cards of their own. Intrigued? Don’t wait; get started with this new twist on your old favorite today! 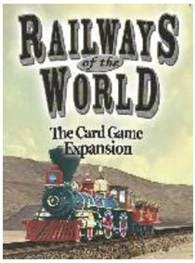 EGL101299N
Railways of the World: Card Game Expansion
$9.99 SRP
Now there is an Expansion for this fast paced card game adaptation of the highly popular Railways of the World board game series. Players use track cards and city cards to build a series of railroad routes and deliver goods. As the game progresses, players work to connect more cities, upgrade their engines and deliver goods through a network of routes.
The Expansion creates new mechanics and additional bonus scoring options for the base game by adding: Tunnels to connect existing cities giving access to cubes and impacting city control. Switchers to allow track color to change during building thus allowing connection to a new color city. Grey Cities to provide additional goods for deliveries. Barons to provide additional bonus scoring options.
Posted by ACD Distribution at 10:48 AM

Email ThisBlogThis!Share to TwitterShare to FacebookShare to Pinterest
Labels: card, eagle games, expansion, may, railways of the world