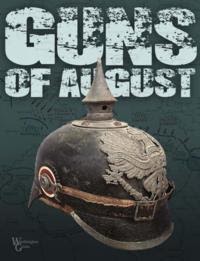 The Guns Of August simulates the first three months of WWI in the West, when mobility reigned and the fate of France hung in the balance. Game mechanics compensate for players’ 20/20 hindsight to encourage historically accurate play that makes “sense” in game terms while avoiding a “straight jacket” of special rules to force irrational play. Players maneuver corps and divisions through 9-mile wide hexagons in turns that span three days each. The game has two short 3 and 8 turn scenarios as well as a 27 turn campaign game. Playing time is from 30 minutes for the 3 turn scenario to 3 to 4 hours for the campaign game.
Posted by ACD Distribution at 3:34 PM

Email ThisBlogThis!Share to TwitterShare to FacebookShare to Pinterest
Labels: board, guns of august, may, worthington games