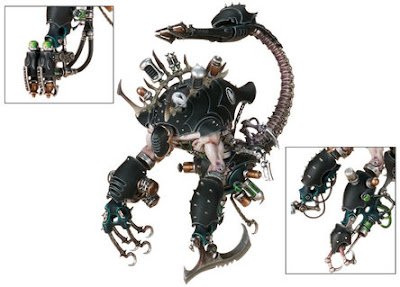 GAW45-11
Dark Eldar Talos Pain Engine
$44.50 SRP
The Talos Pain Engines are seen as the pinnacle of the Haemonculi's art. Creations of mad genius, each one is part organic and part mechanical, festooned with surgical apparatus and horrible-looking weapons of war. The bladed forelimbs of a Talos can scissor even an Ogryn into bloody chunks, while whirling blades and drills can eviscerate a man in seconds, disassembling him into his component parts, rending him down until nothing is left. For nearby Dark Eldar this is like watching an artist at work. For nearby foes it is a horrifying, gut-wrenching sight that can turn even the bravest warrior into a quivering wreck.

The Cronos Parasite Engine is a disturbing, bizarre creation and is used, much like the Talos, as a torture device and war machine. Through the strange blend of alchemy and science practiced by the Haemonculi covens, the Cronos drains away not the physical constituents of its victims, but their life essence. What remains of its prey when the vile creature has drunk its fill is little more than a grey shriveled husk that quickly collapses into dust. An Archon will often keep a Cronos in his employ for when realspace raids take longer than expected as their mere presence can drive the Dark Eldar into a murderous frenzy that few defenders can hope to stop.
This multi-part plastic kit contains parts to make one Dark Eldar Talos Pain Engine or one Cronos Parasite Engine. This kit comes in 89 components, including all manner of chain-flails, ichor injectors, a liquefier gun, a spirit syphon and many syringes full of deadly toxins and adrenaline boosters, plus several variant heads and arms so that you can personalize the kit to your heart's content. It also comes with a ball and socket flying stand and a large flying base. 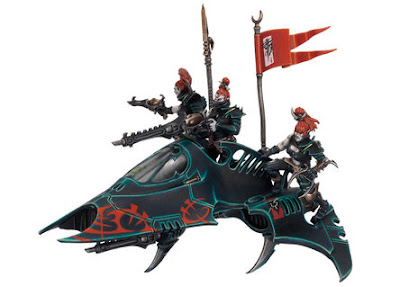 GAW45-15
Dark Eldar Venom
$30.00 SRP
The Dark Eldar rely heavily on surprise and raw speed, and hence their skycraft are all fast and maneuverable. The most deft of all Commorite transports is the Venom, an arrow-swift skimmer that carries an elite cadre of warriors into battle to strike like a poisoned dart at the heart of the foe. Should even a single Venom penetrate the enemy defenses it can be enough to sow the seeds of destruction, laying down supporting fire as its lethal cargo goes to work. For this reason, the Venom is the perfect transport vehicle for Archons, Succubi and their respective bodyguards.

This multi-part plastic kit contains one Dark Eldar Venom in 62 components. The kit includes two Wyches that represent a unit being transported into battle, a third Wych firing the on-board splinter cannon and a clear plastic canopy, giving you the option to paint the pilot and still be able to see him once the kit is fully assembled. It is also supplied with a ball and socket flying stand and a large flying base. 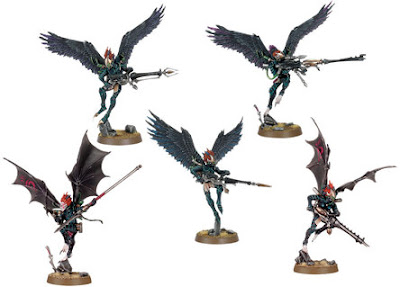 GAW45-16
Dark Eldar Scourges
$25.00 SRP
A rich and daring Dark Eldar may surrender himself to the Haemonculi, requesting that his bones be hollowed out, that bands of new muscle be grafted onto his torso, and powerful wings and adrenaline dispensers be attached to his shoulders so that he is capable of true flight. The Kabal overlords pay handsomely for these veteran warriors to fight for them and as a result the Scourges will often equip themselves with the best weaponry and armor that they can find. It is rare for the Scourges to engage the enemy up close, preferring to lay down a withering hail of fire before flying away out of harm's reach.

This multi-part plastic set contains five Dark Eldar Scourges in 80 components, including plenty of weapon upgrades in the form of a shredder, splinter cannon, haywire blaster, heat lance, blaster and a dark lance. There are also several weapon options should you wish to upgrade one of the Scourges into a Solarite to lead the unit. The set includes five 25mm bases. 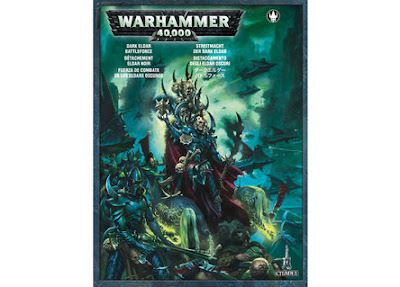 GAW45-06
Dark Eldar Battleforce
$95.00 SRP
The Dark Eldar Battleforce is the best way to start a new Dark Eldar army or build upon an existing one. This boxed set contains a squad of Kabalite Warriors, a squad of Wyches, a Raider and a unit of Reaver Jetbikes, all of which are ready and willing to tear their way into realspace, hack apart some unsuspecting victims and spirit the rest away to a lifetime of pain and suffering in the Arenas of Commorragh.