ASMDIT02US
Dice Town Expansion
$34.99 SRP
You think you know everything there is to know about the city of Dice Town?
Discover its seedy underbelly: pan for gold in the river, buy new merchandise from the General Store, hire bandits, hunt down outlaws, control ranches, ally with the Indians. From now on, nothing will ever be the same!
This expansion for Dice Town allows the addition of a 6th player. But it also offers multiple new possibilities that make the game even more tactical, rich and lively starting with 2 players. 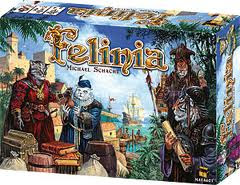 ASMFEL01US
Felinia
$49.99 SRP
Gold! Spices! Felinia is a mysterious continent, full of exotic riches! It's up to you to establish profitable trading posts, but be careful: the competition is stiff! Alone or with a partner, hire a ship, fill its holds with refined merchandise, and set off to make yourself a fortune!
Felinia is a game by Michael Schacht (Zooloretto, Valdora...). For 2 to 4 players, is it extremely interactive. It blends an original bidding system to a clever movement rules. Two game boards allow for varying difficulty: Felinia is fascinating and addictive, for beginning players as well as confirmed masters.
Posted by ACD Distribution at 12:26 PM