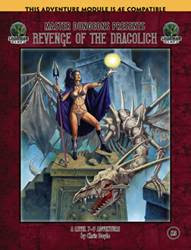 GMG5303
Master Dungeons M3: Revenge of the Draco
$19.99 SRP
The Kingdom is in peril! An ancient enemy has gathered dark allies and is close to locating a powerful artifact, certain to be used to gain revenge against the Kingdom. The Lady Vizier sends a band of heroes into the shadowy depths of the Underdark to confront this adversary in his own lair. Soon the heroes are engaged in a drama much larger than themselves, and the revenge of the dracolich is at hand!
Revenge of the Dracolich is a level 7-9 heroic tier super adventure. The setting for the adventure, the Lost Caverns, is one large encounter space filled with numerous factions, each with their own goals and alliances. For the heroes to survive and hope to defeat their enemy, they will need to throw their lot in with one or more of these factions.
But all is not as it seems down below.
Posted by ACD Distribution at 11:41 AM