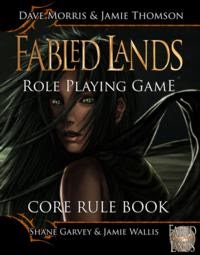 CB77320
Fabled Lands Core Rule Book (SC)
$29.99 SRP
The Fabled Lands Core Rule Book and twelve source books are based on the Gamebooks written in 1995 by Dave Morris and Jamie Thomson.
Harkuna is a world of mystery, intrigue and high adventure. Create campaigns and quests based in your favorite territories from The Fabled Lands: The War-Torn Kingdom of Sokara; the prosperous cities of Golnir (Cities of Gold and Glory), the Purple Ocean (Over the Blood-Dark Sea), north through the Spine of Harkun to The Plains of Howling Darkness, further west to The Court of Hidden Faces in Old Harkuna or east across the ocean to the oriental Lords of the Rising Sun in AkatSuri.
The Role Playing Game has been designed using rules that are based on the original gamebook rules but have been expanded to achieve a party, role play experience. The twelve source books will detail the 6 previously published gamebooks as well as the 6 unpublished ones. Both Dave Morris and Jamie Thomas have had a side-line interest in what has gone into the role playing game to ensure that the original Fabled Lands feel remains intact. 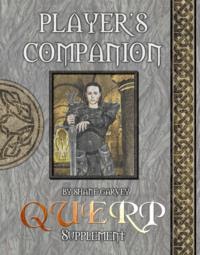 CB77302
QUERP Players Companion (SC)
$18.99 SRP
The QUERP Player's Companion is the perfect supplement for players who are looking to expand their character beyond the Core Rules.
There are over 15 new character types to choose from, such as the Necromancer, Alchemist and Templar. There are also all the rules needed to play a non-human character race rather than just human. This book will allow the players full customization of their characters as well as additions to the existing rules; new spells, special abilities and adventuring gear.
QUERP really is the game of Quick Easy Role Play. 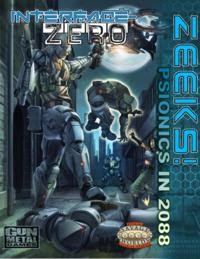 CB76702
SW: IZ: Zeeks Psionics in 2088 (SC)
$14.99 SRP
Wanna Play Some Mind Games? When Hernando Vasquez walked into the North American Coalition embassy in Madrid and torched everything just by glaring at it, everybody knew: zeeks are among us. Some people hate 'em; some people love 'em. And make no mistake about it, tomo, that means most people either want to shoot them or use them to their own ends. But then I suppose that just makes life more interesting, ne?
Have You Got What It Takes? Zeeks: Psionics In 2088 gives you an opportunity to explore the subculture of zeeks, either as a GM wanting to incorporate them into your game or a player wishing to play a psychic character. Whether you want to have a full-blown campaign focusing on the tumultuous world of psions, or just know what might be lurking back there in the shadows, we've got your back —everything from the Psi-Hunters who stalk zeeks to the fringe cults that worship them. 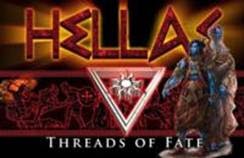 CB75912
Hellas: Threads of Fate First Age Vol 4
$9.99 SRP
Millennia ago the scientist Telemikus the Explorer discovered a terrible secret that would grant its possessor the power of the Gods. Today the galaxy teeters on the edge of destruction as this secret is finally revealed. Threads of Fate takes the heroes from the iron skies of Thebes to the graveyard system known as Knossus, birthplace of the Hellenes. Can the heroes stop one man’s fear from tearing apart the universe?
Only the fates can tell. Threads of Fate can be played as a standalone scenario or as part of the Legacy of the First Age campaign. 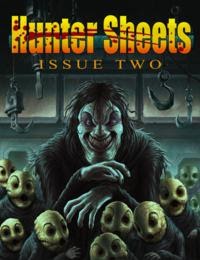 CB7507
SLA: Hunter Sheets Issue Two (SC)
$19.99 SRP
Hunter Sheets return with 20 more enemies to threaten the stability of the industrial giant. In this issue, these missions take the Operatives into the lowest recesses of Downtown where they'll face monsters as yet unknown by Station Analysis, like members of The Mesha - a powerful serial killer cult, and hunt down traitor subversives like Radio Clash and General Sidi Gejkta that are building massive military forces to stand against SLA.
Off-world, the Krell continue to wreck havoc on Xaime, where Legatus Dorot Binzwald is conducting horrific experiments on the remaining populace. Perhaps worst of all, The Root Dogs, the deadliest of all Conflict Alien races have returned to the World of Progress, and are baying for vengeance. The cracks in SLA Industries' power-base are starting to show, and the dark days have only just begun... 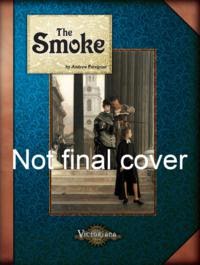 CB7210
V2E: The Smoke (SC)
$29.99 SRP
The soul of a nation, the heart of an Empire. Welcome to the greatest city in the world. For nearly a thousand years it has stood against fire, plague and revolution, and still it endures. Thousands flock to the city looking for a new life, only to become fuel for the fire of industry or be broken by vice and despair. But not everyone seeks the wealth of the capital, for amidst the rookeries and old places of the city there is old magic woven into the very stones.
London brings the world to your door; spices from the east, fine linen, fashions from Paris, mysterious artifacts from forgotten nations, opium, absinthe and many other dark delights. There are a thousand temptations and a million ways to enjoy them, and they all await you in the Smoke.
Posted by ACD Distribution at 4:35 PM