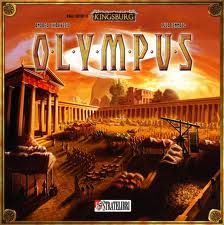 FFGST08
Olympus
$59.95 SRP
In Olympus, a worker placement game for 3-5 players, you send your cunning priests to worship the fickle Olympian deities. The gods will grant their divine favors to any priest who will perform a ceremony in their name. Use the gods for your own mortal purposes to increase your agricultural production, advance your culture, erect buildings, and go to war.
Olympus includes a Mount Olympus game board, five Polis boards, over 180 cards, a rulebook, and over 100 playing pieces. A worker placement game that incorporates a unique level of direct interaction, Olympus has a strategy for any player from resource gathering and building development to more aggressive options, such as war and plague. Praise the gods, and reign over Ancient Greece! 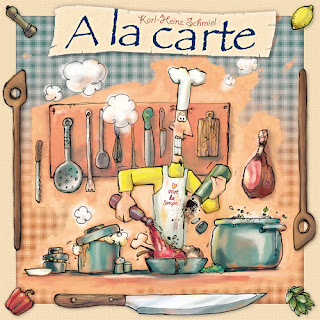 FFGVA75
A La Carte
$49.95 SRP
A la Carte, the culinary game for 2-4 skilled French cooks, pits players against each other in a cooking war to be named top chef.
Follow the recipes to heat and spice your dishes accordingly, while attempting to avoid over-seasoning or burning them. What is competition without a little treachery?  Coffee Break tokens allow players to gain special benefits like the ability to swap stovetops with other players. Every perfect dish gains you a cooking star, gain three or be the player with the most victory points to win the game.
The finest French chefs need the finest equipment, which is why A La Carte comes with four stovetops, four pans, over 50 culinary tokens, 4 spice jars, 80 spices bits, 1 Heating die and more. Can you stand the pressure, or will the competition serve you a dish of defeat? 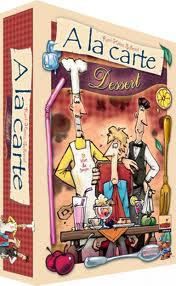 FFGVA76
A La Carte: Dessert
$29.95 SRP
Grab a pan and your chef’s hat, the kitchen is about to heat up with this new expansion for A la Carte!
A la Carte - Dessert retains the original elements of the base game while introducing a new chef into the culinary mayhem of your kitchen battle. With new Menu Cards, 2-5 cooks must vie against each other to finish their selection of dishes for more victory points. Are you up to the challenge?
The new Dessert and Briny recipes, new Coffee Cup tokens, and a new Assorted Condiments jar will ensure that A la Carte - Dessert will have you cooking long after the restaurant closes. Bon Appetit! (German Edition with English Rules)
Posted by ACD Distribution at 6:06 PM

Email ThisBlogThis!Share to TwitterShare to FacebookShare to Pinterest
Labels: a la carte, board, dessert, fantasy flight, may, olympus