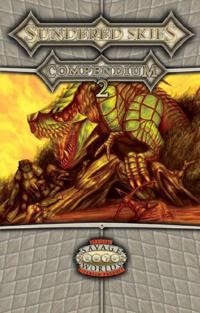 TAG10200
SW: Sundered Skies: Adventure Compendium 2
$14.99 SRP
In Songs Of Remorse mini-campaign the heroes find themselves battling to prevent the Bright Cabal from repeating a tragic experiment which destroyed an entire island. In Mindthief, they become caught up in the schemes of a vampire lord with a unique, and terrifying power. Schemes which lead them back to a ghost haunted barren island.
In Mists Of Savannah, they are lured to a recently discovered jungle isle where they are locked in a deadly race to solve a mystery as old as the Sundering. Finally in Festival of Madness, the heroes are given a divine task which takes them the length and breadth of the Sundered Skies as they pursue a lost soul, and his life’s work. This danger filled quest will eventually culminate on the most dangerous isle of all, in a desperate show-down with an enemy they believed long dead.
Posted by ACD Distribution at 11:24 AM