ZMG7092
Ora & Labora
$69.99 SRP
1-4 Players
Ages 13+
2-3 Hours
Each player starts with a heartland on which he can place buildings that are usable by all players. Additional landscapes can be bought so that each player develops a small diocese, stretching from the coast up to the mountains. The winner is the player with the most valuable diocese at the end of the game. The game introduces an innovative game mechanic: the production wheel. It also features two variants: France and Ireland. 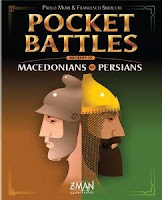 ZMG4302
Pocket Battles: Macedonians vs Persians
$14.99 SRP
2 Players
Ages 10+
30 Minutes
The ancient armies of Macedonia and Persia are yours to command in this portable and exciting tile-based war game. You’ll fight on three fronts with armies you create for each battle, making every battle a new experience. Each Pocket Battles game depicts two armies. The rules for combat are the same in each Pocket Battles game so you can have armies from different series fighting: Elves vs. Romans! WW2 soldiers vs. Napoleonic forces! It’s all possible with Pocket Battles. The Pocket Battles series can satisfy your need for battle, strategy, and victory, just by reaching into your pocket.
Posted by ACD Distribution at 1:34 PM