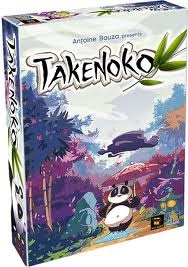 ASMTAK01US
Takenoko
$44.99 SRP
UPC 3760171550304
The players take the role of courtesans of the Nippon emperor. They take care of his Giant Panda by growing a bamboo plantation. Their mission: to farm parcels of land, irrigate them, and have green, yellow or pink bamboo grow. In turn, they see what the weather brings and perform two actions from among those offered to them: get a new plot of land or irrigation channel, grow bamboo, feed the panda or draw an objective card. The game ends when a player has completed 7 to 9 objectives (depending on the number of players). The player who gets the best score by adding the total value of their completed objective wins the game.
Posted by ACD Distribution at 1:00 PM