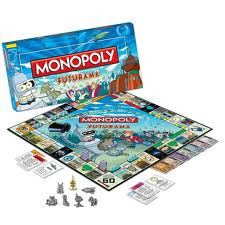 USOMN006312
Monopoly: Futurama
$39.99 SRP
NPI
Good news everyone! The World of Tomorrow now features the board game of yesterday!
Grab your holophonor for some virtual realty in the year 3000. Buy properties across the four corners of the universe (and the game board) as you hobnob with huggable industrialist Mom, dance with the Robot Devil, and take a mutated plunge into Sewer City. But mind the Hypnotoad - or else Do Not Pass Go, Do Not Collect 200 Professorland Fun Bucks. Custom Resi-Domes and People Hives replace traditional houses and hotels.
Includes seven collectible tokens voted on by Futurama fans – GOLDEN Bender, Hypnotoad, Brain Slug, Seymour, Planet Express Ship, What If Machine and Leela’s Boot! 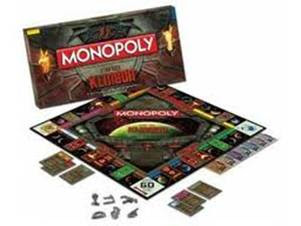 USOMN066201
Monopoly: Star Trek: Klingon
$39.99 SRP
NPI
IT IS A GOOD DAY TO DIE!
You have been chosen to preserve the glory of the Empire! Control the galaxy with the might of Kahless and be immortalized in the Hall of Warriors. Victory shall be yours if you conquer all the systems within the galaxy. Qo’noS, Romulus and even the puny Federation’s precious Earth, are all up for grabs. Honor will rise in your houses as you bring you enemies to their knees. SUCCESS!
Includes Game board, 6 Collectible tokens, 28 Title Deed Cards, 16 COMBAT cards, 16 HONOR cards, 2 Dice, 32 Outposts, 12 Capitals, 1 Pack of Klingon Forces, Rules. 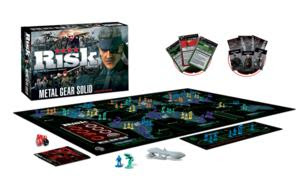 USORI069304
Risk: Metal Gear Solid Collectors Ed.
$39.99 SRP
NPI
War has changed. Private Military Companies have taken the place of state armies as the world’s primary war machines.
As the fires of war continue to spread, take command and wage the ultimate battle for supremacy. Hire one of eight legendary bosses to lead your soldiers, including Solid Snake, Raiden and Liquid Ocelot. Coordinate with arms dealers to gain tactical advantages over those who would oppose you. The age of deterrence is now the age of control. He who controls the battlefield, controls history. Game comes complete with:
Over 290 custom game pieces: 5 PMC Armies 8 Bosses Outer Haven Battleship Drebin’s Shop Cards Territory Cards PMC Headquarters Custom Outer Haven Game Board Custom Earth Game Board 7 dice There are now 3 ways to play Risk for faster game play!
Posted by ACD Distribution at 9:00 AM