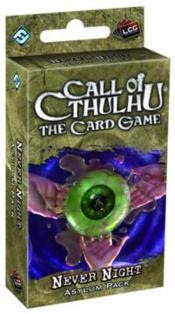 FFGCT50
CoC: LCG: Never Night Asylum Pack
$14.95 SRP
The hunt for relics takes the different factions of Call of Cthulhu: The Card Game to the glaciated shores and frozen mountains of Antarctica. Dedicated cartographers, gun-toting thugs, and insidious cultists seek to unlock dark secrets frozen in time in Never Night, the fourth Asylum Pack in the Ancient Relics cycle. In the desolate antarctic climes, great powers lie sealed in layers of ice. Apply your talents to be the first to drill into Never Night and unlock its terrifying secrets! 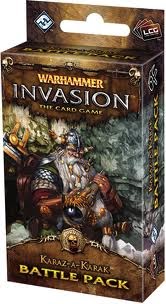 FFGWHC26
WH LCG: Invasion: Karaz-a-Karak Pack
$14.95 SRP
Karaz-a-Karak is the fourth Battle Pack in The Capital Cycle for Warhammer: Invasion The Card Game! With three copies each of 20 unique cards (half of which are devoted to the Dwarfs), Karaz-a-Karak is an invaluable expansion for players harboring ancient grudges against past opponents. This hard-hitting Battle Pack introduces a host of options to players’ Dwarf decks, including the powerful Capital Center card that provides an amazingly beneficial text effect... if it remains in play long enough to trigger. Not a Dwarf player? Karaz-a-Karak offers never-before-seen support, tactic, and unit cards for players of all six factions.
Posted by ACD Distribution at 8:00 AM