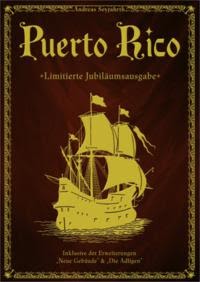 RIO456
Puerto Rico Anniversary Edition
$100.00 SRP
UPC 655132004565
This is the same great game with expansions and very special components.
Prospector, captain, mayor, trader, settler, craftsman, or builder? Which roles will you play in the new world? Will you own the most prosperous plantations? Will you build the most valuable buildings?
You have but one goal: achieve the greatest prosperity and highest respect! This goal is attained by the player who earns the most victory points!
This special edition will include not only the base game but also the “new buildings” and “nobles” expansions that were published separately from the original game in the Treasure Chest, a collection of expansions for seven games produced by Rio Grande Games and Alea released in 2009. No changes have been made to the game-play but there are many custom components and artwork: The cardboard doubloons are now sixty metal coins, while the fifty octagonal resources have been replaced with colored wooden crates. The building tiles are now illustrated and the cardboard for those tiles and other components are nearly 3 mm thick to give the bits more heft. The individual player boards, the VP tokens, the ships and other components have also been redesigned.
Posted by ACD Distribution at 9:37 AM