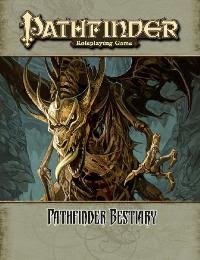 PZO1120
PFRPG: Bestiary 3 (HC)
$39.99 SRP
The greatest monsters of fantasy gaming come alive in the very first hardcover release for Paizo's new Pathfinder Roleplaying Game! Backward-compatible with the 3.5 fantasy rules but packed with new solutions and options that place it firmly on the cutting edge, the Pathfinder Roleplaying Game is the culmination of the largest open playtest in tabletop RPG history.
This lavishly illustrated, full-color tome contains new takes on more than 250 of the best-loved, most popular monsters of fantasy, ready for instant use in your Pathfinder or 3.5 campaign!
From the comedic-but-deadly goblin to the world-killing Tarrasque, the Pathfinder Bestiary contains a wide range of foes suitable for battles with characters of all experience levels. The book's innovative design and presentation-each monster receives either a full page or two-page spread-makes for an easy reference book that is also fun to read and delightful to flip through and enjoy as a gallery of the industry's strongest fantasy art.
With a cover by fan-favorite Wayne Reynolds and new takes on classic monsters from the best of Paizo's in-house and freelance designers and artists, the Pathfinder Bestiary will set a new standard for RPG monster books in a way that only Paizo can deliver. 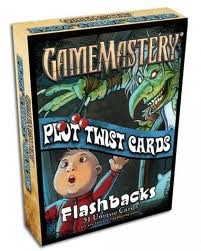 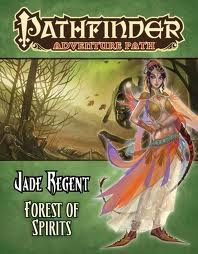 PZO9052
PFA: Forest of Spirits
$19.99 SRP
The heroes finally reach the distant land of Tian Xia, only to once again attract the attention of the oni of the Five Storms. But not everyone wants them dead—the heroes must meet a mysterious woman named Miyaro who promises to lead them to allies deep in the Forest of Spirits. These mysterious spiritual guardians—known as kami—reveal that the oni of the Five Storms once dwelt in a fortress known as the House of Withered Blossoms, deep in the forest. Much can be learned at this fortress, but a few of the old inhabitants remain...
A Pathfinder Roleplaying Game adventure for 10th-level characters, this volume continues the Jade Regent Adventure Path, a sweeping quest that takes the heroes from familiar territory in Varisia all the way across the ice fields of the Crown of the World to distant Tian Xia, the land of the Dragon Empires.
This volume of Pathfinder Adventure Path also features an investigation of the strange spiritual creatures known as kami, as well as a larger article that explores the most notorious ninja clans of the empire of Minkai. Plus several new monsters drawn from Japanese mythology in the Pathfinder Bestiary, new adventures of Varian Jeggare and Radovan (stars of the Pathfinder Tales novels Prince of Wolves and Master of Devils) in the Pathfinder’s Journal, and much more! 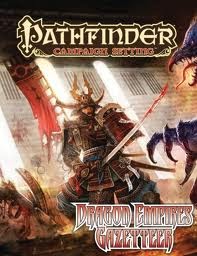 PZO9240
PFCS: Dragon Empires Gazetteer (SC)
$19.99 SRP
The mysteries and wonders of the Dragon Empires are finally revealed!
The continent of Tian Xia stretches from the polar ice in the north to well south of the equator—a realm where honorable saumrai, devious ninja, martial artistry, strange spirits, and imperial dragons rule. This broad overview of Tian Xia presents details on more than two dozen regions inspired by the mythology of Japan, China, Korea, Vietnam, Indonesia, and other Asian touchstones, as well as brand new realms like Wanshou (a swamp nation of slaves ruled by a kraken), the hobgoblin nation of Kaoling, the tengu homeland of Kwanlai, the monster-infested Valashmai Jungle, and the underwater locathah enclave of Xidao. The Dragon Empires Gazetteer also presents five new player character races—the birdlike tengus, reptilian nagaji, shape changing fox like kitsune, reincarnated spiritualists known as samsarans, and the shadowy masters of trickery called the wayang. An overview of life in the Dragon Empires offers a look at a new core pantheon (including more than a dozen brand-new deities), several new factions, and the challenges faced by a land recovering from the recent fall of a continental empire.
Grab your katana, ready your best kung fu, and prepare to discover a whole new world of exciting adventure! 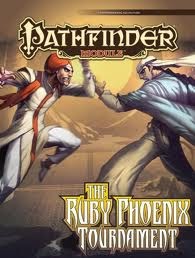 PZO9534
PF Module: The Ruby Phoenix Tournament
$13.99 SRP
Once every ten years, the cosmopolitan city of Goka on the eastern coastline of Tian Xia hosts the Ruby Phoenix Tournament on an island in the city's harbor. Infamous for its strange spectacles and exciting mix of fighting styles, the contest draws combatants from all over the world. Its winner gets his choice of a single item from the legendary treasury of an ancient spellcaster. But this year, not all who have come to compete do so out of respect for the traditions of battle or even out of greed for the reward. They seek instead nothing so much as red revenge!
The Ruby Phoenix Tournament is a tournament-style Pathfinder Module designed for 11th-level characters, written for the Pathfinder Roleplaying Game and compatible with the 3.5 edition of the world's oldest RPG. The adventure serves as an ideal introduction to the folk and fighting styles of the lands of the Dragon Empires. Pathfinder Modules are 32-page, high-quality, full-color, adventures using the Open Game License to work with both the Pathfinder Roleplaying Game and the standard 3.5 fantasy RPG rules set. 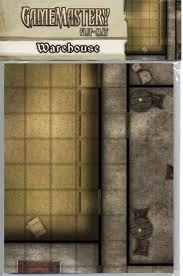 SQW30042
Flip-Mat: Warehouse
$12.99 SRP
Who knows what criminal conspiracies and deadly deals might unfold amid the maze of merchandise in GameMastery Flip-Mat: Warehouse?
With a full suspicious scene on each side, this durable accessory can serve as ambush site or hideout in any tabletop fantasy campaign! This portable, affordable map measures 24" x 30" unfolded, and 8" x 10" folded. Its coated surface can handle any dry erase, wet erase, or even permanent marker. Usable by experienced GMs and novices alike, GameMastery Flip-Mats fit perfectly into any Game Master’s arsenal! On tabletops across the world, the Flip-Mat Revolution is changing the way players run their fantasy roleplaying games!
Why take the time to sketch out ugly scenery on a smudgy plastic mat when dynamic encounters and easy clean-up is just a Flip away? 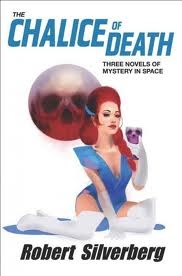 PZO8033
Planet Stories: The Chalice of Death
$15.99 SRP
Three complete novels of mystery in space from Grand Master Robert Silverberg explode back into print for the first time in decades in this thrilling new Planet Stories collection! These extremely scarce tales originally appeared in the legendary Ace Double novel series, and represent a future multiple Hugo and Nebula Award-winning author bridging the explosive, action-oriented science fiction adventures of the early pulps with more introspective themes of the new wave that swept sci-fi in the 1960s. In The Chalice of Death, a human from the far edge of space must track down the legendary planet that birthed his race tens of thousands of years ago. For the legends hold that the long-forgotten Earth holds the Chalice of Life, and the Chalice of Life holds immortality! In Starhaven, interplanetary fugitive Johnny Mantell flees authorities to the artificial pirate world known as Starhaven, sanctuary for the criminals and misfits of space. There he finds a new home for himself—as well as questions about his past, his future, and his very identity itself! In Shadow on the Stars, deep space colonist Baird Ewing returns to Earth for the first time in the thousand years since his ancestors first departed, seeking aid against the aliens who seek to destroy his colony. But the weapon he finds upon the ancient Earth can save only one planet, and Ewing must choose between his two home worlds. Seldom or never reprinted since their original appearances and with a new introduction by the author, these three novels of science fiction adventure blaze back onto the scene, revealing early masterworks of one of the genre’s most gifted and celebrated storytellers! 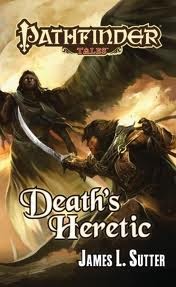 PZO8506
PF Tales: Deaths Heretic
$9.99 SRP
Nobody cheats death. A warrior haunted by his past, Salim Ghadafar serves as a problem-solver for a church he hates, bound by the goddess of death to hunt down those who would rob her of her due. Such is the case in the desert nation of Thuvia, where a powerful merchant on the verge of achieving eternal youth via a magical elixir is mysteriously murdered, his soul kidnapped somewhere along its path to the afterlife. The only clue is a magical ransom note, offering to trade the merchant’s successful resurrection for his dose of the fabled potion. But who would have the power to steal a soul from the boneyard of Death herself? Enter Salim, whose keen mind and contacts throughout the multiverse should make solving this mystery a cinch. There's only one problem: The investigation is being financed by Neila Anvanory, the dead merchant's stubborn and aristocratic daughter. And she wants to go with him. Along with his uninvited passenger, Salim must unravel a web of intrigue that will lead them far from the blistering sands of Thuvia on a grand tour of the Outer Planes, where devils and angels rub shoulders with fey lords and mechanical men, and nothing is as it seems... From noted game designer and author James L. Sutter comes an epic mystery of murder and immortality, set in the award-winning world of the Pathfinder Roleplaying Game.
Posted by ACD Distribution at 10:00 AM