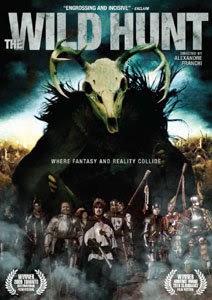 MPI5007
Wild Hunt, The DVD
$24.98 SRP
A lovesick young man tracks down his ex at a medieval LARP (live action role playing) event that quickly spirals out of control when the outsider invades their turf.
A day of high-spirited fun takes a turn into darkness as a game becomes all too real in this comedy drama from Canada. Erik (Ricky Mabe) and his girlfriend, Lyn (Tiio Horn), are both interested in Live Action Role Playing games, in which teams of players assume the guise of particular characters and act out mock battles as part of a fantasy scenario. However, Lyn begins developing a stronger interest in the game than Erik, and runs off for a weekend of play without bringing him along. Depressed, Erik and his brother Bjorn (Mark A. Krupa) set out to catch up with her as their friends impersonate a horde of Viking warriors. Bjorn brings along his "Hammer of Thor" as well as Murtagh (Trevor Hayes), who takes his role as a shaman more than a bit seriously. As the day wears on, Erik's frustration is reflected in his mates, and what began as an afternoon of fantasy and adventure turns into a battle where the blood and wrath are very real.
Posted by ACD Distribution at 10:00 AM