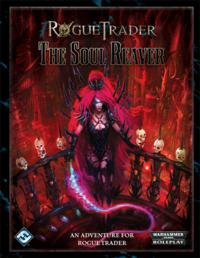 The Dark Eldar are a plague on the galaxy. Any who cross the Maw and sail the void of the Koronus Expanse learn to fear the wicked silhouettes of their ships and their seemingly endless cruelty towards all life, including their own. Only vigilance and firepower keep the worst depredations of these terrible raiders at bay. Do you have the courage to face them in the name of the Emperor? The Soul Reaver, an adventure in three parts for Rogue Trader, presents a chance for daring Explorers to look deep into the twisted heart of Dark Eldar society in the Koronus Expanse, where they’ll attempt the greatest heist of their careers! This, along with a new playable xenos Career Path, the Dark Eldar Kabalite Warrior, offers players useful content long after the adventure concludes. • A sourcebook for Rogue Trader, the Warhammer 40,000 Roleplaying Game • A 144 page book featuring a full adventure in three parts • Pits characters against the vile machinations of the Dark Eldar • Contains a new playable xenos Career Path: the Dark Eldar Kabalite Warrior • Appropriate for characters of all levels. 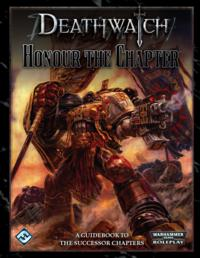 Honour the Chapter, a supplement for Deathwatch, provides a wealth of options for players interested in characters drawn from Chapters created during the Second or subsequent Foundings. This detailed tome contains new character creation rules, a host of relics unique to each Chapter, and plenty of guidance and adventure seeds for Game Masters. For ten millennia, Space Marines from a thousand chapters have fought and died in the name of the Emperor of Man. Take your place among these honoured heroes! • A sourcebook for Deathwatch, the Warhammer 40,000 Roleplaying Game • A 144 page book featuring rules on additional Space Marine Chapters • Contains new character creation rules for Chapters beyond the First Founding • Features new relics and adventure seeds • Appropriate for characters of all levels. 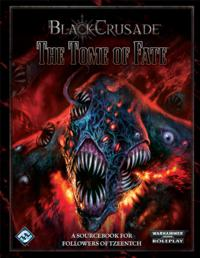 “Your naiveté amuses me, child. There is no Fate. There is only the Will of Tzeentch." –Verial Jenneque, Sorceress of Q’Sal The Tome of Fate is a mind-shattering supplement for Black Crusade! It presents invaluable information on Tzeentch, his dark servants both daemonic and mortal, and how his influence is felt across the Screaming Vortex. All this and more lies within The Tome of Fate, including a dangerous new adventure on the sorcerous world of Q’Sal. With new weapons and psychic powers to aid them, Heretics can go forth across that unholy stretch of stars and beyond into the depths of the fallen Imperium, ready to challenge Fate and make it their own. Do you possess the will to stand among Tzeentch’s chosen? • A sourcebook for Black Crusade, the Warhammer 40,000 Roleplaying Game • A 144 page book dedicated to the Dark God Tzeentch • Introduces four new Heretic Archetypes, plus daemons, weaponry, and minions • Includes a full adventure set on the sorcerous world of Q’Sal • Appropriate for characters of all levels.

Posted by ACD Distribution at 9:30 AM