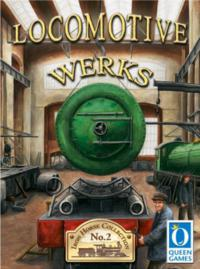 During the 19th century, the German railway network expanded rapidly. However, technical progress was not only due to the ever-growing traffic network, but was also accelerated by the construction of more and more powerful locomotives. In this game, the players assume the role of pioneering railway engineers who try to push the development of technologically advanced locomotives and to gain as much profit as possible from selling them. Contents: 1 game board, 80 double-sided counters, play money(coins), 43 locomotive cards, 5 player order cards, 20 dice, 1 rules booklet
Posted by ACD Distribution at 9:00 AM