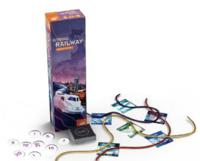 "String Railway" is a unique and unusual train game that uses colorful strings. Strings not only represent the railway lines, but also the mountains, a great river and the rest of the playing field in the game. You are the manager of a railway company and your table is the stage of the game. Your objective is to place station tiles and connect them to one another with strings that represent railways. Create a great network of railways by using as many station tiles as possible. 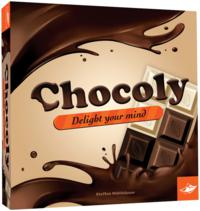 Chocoly (aka, Schokoly) is a tile-laying game in which players attempt to create the largest continuous area of their own color of chocolate. Players keep a hand of four tiles drawn from a common pool of 2x2 tiles. Each tile contains a mix of two or three types of chocolate squares: dark, milk, or white. Play continues with players placing tiles in turns onto the board. An extra element of game play comes from the wooden smarties which can block or enable tiles being laid in a second layer, blocking or creating connections between groups.
Posted by ACD Distribution at 1:00 PM