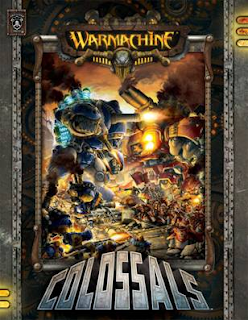 BRACE YOURSELF FOR FULL-SCALE WARFARE! Darkness descends upon the nations of the Iron Kingdoms as the undead legions of Cryx overwhelm Point Bourne, revealing their true strength. As war once again consumes the land, the embattled nations race to deploy colossal warjacks bristling with weaponry to turn the tide. But the emergence of new threats, both ancient and unseen, will force old enemies into uneasy cooperation in a fight for survival! WARMACHINE: Colossals brings you the next thrilling chapter of the WARMACHINE saga. Elevate your game with: • Powerful new colossals—enormous warjacks that dwarf even the largest heavy ’jacks and bring all-new strategies to the table. • New warcasters for each faction, including the third incarnations of some of the Iron Kingdoms’ greatest champions. • Fully compiled and updated Unbound rules, allowing you to recreate iconic large-scale battles with specialized rules to enhance gameplay. • New narrative fiction picking up directly after the exciting events of WARMACHINE: Wrath. • A painting and modeling guide to help you prepare your colossals for combat. • Theme Force lists for each new warcaster, which allow you to create armies based on the specialized forces found in the WARMACHINE world. FOCUS YOUR WILL AND CRUSH THE ENEMY BENEATH YOUR COLOSSAL MIGHT! 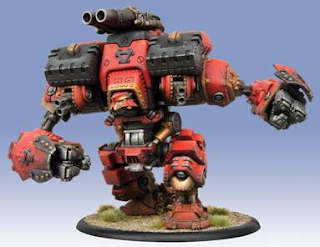 The Conquest is a walking mountain of steel bristling with some of the most powerful weapons ever used on the battlefields of the Iron Kingdoms. The deafening roar of the colossal’s steam-fed engine is punctuated by the staggering percussion of its devastating guns, which unleash a punishing barrage of shells able to reduce warjacks to slag and annihilate entire enemy formations. Deployed to the front lines, the Conquest brings unrivaled firepower to Khadoran battlegroups. The Conquest colossal comes in a box (PIP 33050) and includes a colossal wreck marker. A player may field up to two Conquests for each warcaster in a Khador army. 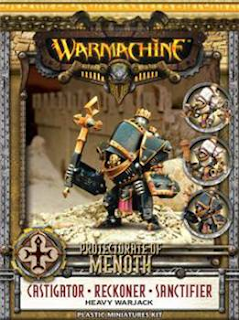 The Reckoner was heralded as the first warjack entirely of Menite design. It lights the way for the faithful with its cannon as it charges across the battlefield and then smashes anything still standing with its club. Based on the same design, the Castigator brings Menoth’s Fury to its enemies with its flaming fists and the ability to ignite the surrounding air with flesh-cremating heat. The Sanctifier is employed in battle to ensure the spirits of the righteous are ushered to Urcaen; as battle wears on, it becomes a vessel for Menite souls, fueling its power even as it protects the righteous. This box set contains three color stat cards and one multi-part heavy warjack plastic model (PIP 32070). Included are all the components to assemble one of three heavy warjack variants: Castigator, Reckoner, or Sanctifier. A player may field any number of these heavy warjacks in a Protectorate of Menoth army. SPECIAL NOTE: PIP 32070 contains the same Mk II stat cards as PIP 32025 and PIP 32038. The model in this box represents the same figures as those PIPs in the game. However, the model in PIP 32070 is a new sculpt and therefore looks different from the models found in those PIPs. In addition, this model is plastic rather than metal. PIP 32025 and 32038 will no longer be available from Privateer Press beginning July 1, 2012. 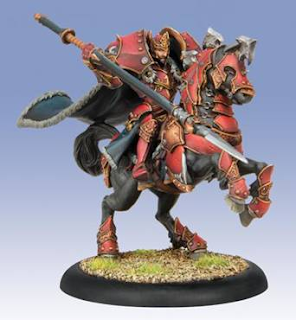 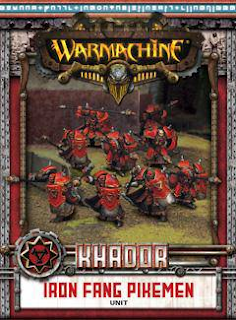 War Machine Iron Fang Pikemen-Khador Unit (10)(repackaging)(white metal) Heavily armored Khadoran Iron Fangs are charged with hunting down and destroying enemy warjacks. Fast and deadly, Iron Fangs are armed with explosive blasting pikes designed to tear through the thickest armor and bring enemy warjacks to their knees. The Iron Fang Pikemen unit comes in a box (PIP 33090). A player may field up to two Iron Fang Pikemen units for each warcaster in a Khador army. SPECIAL NOTE: PIP 33090 contains the same Mk II stat card as PIP 33018. The models in this box represent the same figures in the game. PIP 33090 replaces PIP 33018 and PIP 33012 by offering their contents in a complete unit. The replaced PIPs will no longer be available from Privateer Press beginning July 1, 2012. 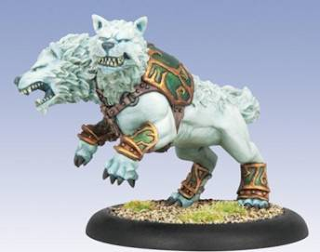 Hordes Circle of Orboros Winter Argus-Circle Light Warbeast (plastic) The savage winter argus stalk the dark, frozen hinterlands of the Scarsfell Forest and Blackroot Wood, prowling under cover of great northern storms. Gouts of gelid breath freeze the argus’ victims in place until the pack closes in for the feast. Though feared by many, the creatures are prized by northern druids for their savagery and the supernatural cold they can manifest to cripple the enemies of the Circle Orboros. The Winter Argus light warbeast comes in a box (PIP 72060). A player may field any number of Winter Argus in a Circle Orboros army.

The Sons of Bragg swagger across western Immoren like living legends, each mighty with both sword and voice. The Sons are heard long before their arrival, booming mighty chants that resound off trees and mountains. Wrathar leads the chorus of his brothers Tor and Rhudd. Their voices join in perfect harmony to belt out powerful chants that sustain them despite impossibly grievous wounds. On their own each brother is formidable, but together they are an army of three. The Sons of Bragg unit comes in a box (PIP 71063). A player may field one Sons of Bragg unit in a Trollblood army.

Few warbeasts survive long enough to distinguish themselves in the service of the skorne, but the fiercely intelligent and disciplined Tiberion has fought alongside Tyrant Xerxis for over a decade. Because the titan’s intractable nature made him almost impossible to train, his original handlers nearly put him to death. Xerxis sensed an extraordinary fighting spirit in him, though, and took it upon himself to break the beast. Now Tiberion serves his master Xerxis with all the devotion of a sworn soldier, standing immovable against waves of enemies even as he shatters entire formations with his powerful tetsubo. The Tiberion character titan heavy warbeast upgrade comes in a blister (PIP 74061). The Tiberion character titan heavy warbeast upgrade is NOT a complete model. Players will need a Skorne Cannoneer/Gladiator/Sentry Titan Heavy Warbeast (PIP 74057) in addition to this kit. A player may field one Tiberion in a Skorne army. 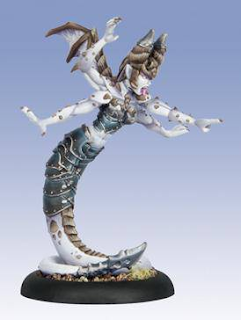 Hordes Legion of Everblight Succubus-Legion Solo (white metal) Products of generations of Everblight’s manipulations, succubi are fonts of blighted arcane power. To create each one, a specially selected Nyss is brought to the spawning pools and ritually bathed in the blood of a warlock. It emerges as something no longer wholly Nyss, attuned to the warlock whose blood actualized its second birth. This ritual empowers each succubus as an amplifier of its warlock’s own gifts. With their every thought and action these creatures carry out the will of their masters and the dragon itself. The Succubus solo comes in a blister (PIP 73060). A player may field one Succubus for each warlock in a Legion of Everblight army.

Your guide for how to Play Like You’ve Got a Pair. No Quarter Magazine is your best source for new IK RPG material, and No Quarter #43 is the first issue to feature playable IK RPG content! Additionally, Guts & Gears heads to the east with a revealing look at the mighty Siege Animantarax and Gavyn Kyle checks in with a dossier on the powerful trollkin leader Hoarluk Doomshaper.

Posted by ACD Distribution at 9:30 AM