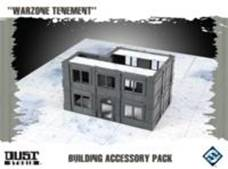 Dive into cover and clash with your opponents at point blank range with the Building Accessory Pack for Dust Tactics and Dust Warfare. Easy to assemble into a host of different shapes and sizes, the Building Accessory Pack will have you fighting in an urban warzone in no time. Rain down fire from the rooftops, blast away at troops hiding behind protective brick walls, and lead risky assaults in the dilapidated hallways of once great buildings. • Contains two levels of the customizable building set introduced in Operation “Cerberus” • Add new terrain to your games of Dust Tactics and Dust Warfare with this expansion • Includes over 35 modular pieces that can be used to assemble a host of structures in different shapes and sizes • In the heat of battle, structures provide a variety of cover options for your forces • Use the Building Accessory Pack to create your own urban battlefield 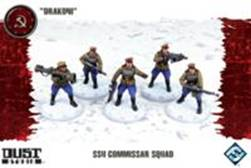 As the political officers of the SSU, Commissar Squads have the task of enforcing the bloc’s ideology. Members of this squad can be attached to other squads, or they may also be deployed as a single squad. Each commissar has either a special ability or a unique weapon to augment whatever unit he joins. Whether fielded as a unit or separated into other units, the SSU Commissar Squad is a powerful addition to your Dust Tactics and Dust Warfare army. • Includes five highly detailed plastic models • Deploy the SSU Commissar Squad as a unit, or separate them into your other SSU units • Use these models in games of Dust Tactics or Dust Warfare • Features tournament-ready unit cards for the SSU Commissar Squad and each individual commissar • This unique squad adds numerous strategic options for SSU commanders

Supporting three different builds, the Panzer-Kampfläufer III adds destructive weapons and extra toughness to your Axis armies in Dust Tactics and Dust Warfare. The Flamm-Luther uses massive flamethrowers to incinerate opposing troops and vehicles. Meanwhile, the Wotan fires explosive lasers from afar, punching holes in anything in its path. With the same laser cannons as the Wotan, the Wotan-AR features heavier armor for added protection. Reinforce your army with the Panzer-Kampfläufer III expansion and devastate your enemies. • Contains one finely detailed plastic miniature and components for all of its variant builds • Deploy the Panzer-Kampfläufer III as the Flamm-Luther, Wotan, or Wotan-AR • Field this walker in both Dust Tactics and Dust Warfare • Includes tournament-ready unit cards for each walker type • Offers Axis generals access to powerful new weapons 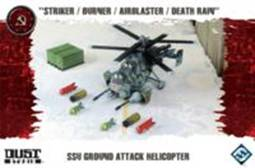 Swift, deadly, and armed to the teeth, the Ground Attack Helicopter expansion for Dust Tactics and Dust Warfare supports SSU forces with precision air strikes. Launch this machine in one of four different builds, each specializing in a different combat role. The Striker, for example, is armed with heavy machine guns and cannons, providing air superiority. Choose your armament of cannons, bombs, and rockets and unleash a salvo of destruction upon your enemy with the Ground Attack Helicopter. • Includes one highly detailed plastic miniature and components for all of its variants • Launch the Ground Attack Helicopter in one of four builds: the Airblaster, Burner, Striker, or Death Rain • Use this model for both Dust Tactics and Dust Warfare • Contains Tournament-ready unit cards for all four build options • Supports the SSU army with a variety of weapons options including rockets, bombs, and cannons
Posted by ACD Distribution at 9:00 AM