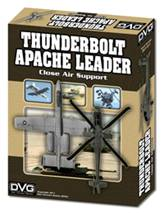 Thunderbolt-Apache Leader (TAL) puts you in the cockpits of the world’s best Close Air Support aircraft. In TAL, you’ll zoom through canyons hunting enemy tanks and troops while dodging their AAA fire and SAMs. Stuffing all this heavy metal in one box has allowed us to expand the normal Leader component set! This game comes with 168 cards and 5 counter sheets! TAL puts you down in the weeds in 8 campaigns spanning the globe. The game system creates immense replayability by pairing a Tactical Situation card with the Campaign card to create a unique environment for the campaign. This means that your campaign in North Korea might be part of a Holding Action, Show of Force, Rapid Deployment, or General War. The game places you in command of the pilots and aircraft of a squadron of U.S. Close Air Support (CAS) aircraft in hostile campaigns around the world. The aircraft and weapons available for each campaign are historically accurate. This is a solitaire game featuring modern air operations, and a great mix of strategic and tactical combat. Each mission takes only 30 minutes to play. Components 168 cards 22” x 17” Mounted Tactical Map 8 campaigns 2 Counter sheets of 5/8” counters 3 Counter sheets of 3” Terrain tiles Full color rulebook Help Sheet

The expansion game adds Wingmen to the Down In Flames system. Each expansion includes 2 Wingmen cards for each of the aircraft types appearing in both Aces High and Guns Blazing. The expansion also includes 10 new aircraft cards. Players must own Aces High and Guns Blazing to use this Expansion. 2 to 6 players WWII Air Combat Fast to learn and play Each dogfight takes only 20 minutes 160 cards 1 Rule Sheet
Posted by ACD Distribution at 1:00 PM