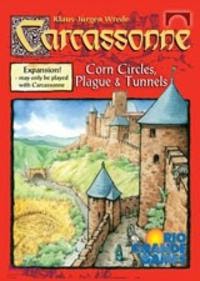 RIO460
Carcassonne: Corn Circles, Plague/Tunnel
$17.50 SRP
This medium-sized expansion includes the components from the three earlier published expansions: Crop Circles, Plague, and Tunnels.
Crop Circles: The seventh official mini expansion for Carcassonne, this adds 6 tiles depicting Crop Circles with corn stalks as the new watermark. The Crop Circles allow a player to place a second follower on an already-claimed feature, or remove an already-placed follower back to their supply.
Plague: Carcassonne: Die Pest (The Plague) was released with issue 2010/6 of Spielbox Magazine (both German and English editions). From the German: Pestilence descends upon Carcassonne, spreading under the players’ control across the landscape tiles and carrying off any followers unfortunate enough to be located there.
Tunnels: Der Tunnel is another small Carcassonne expansion published in an issue of Spielbox magazine. This one is included with Spielbox 6/2009. Like its predecessor, Carcassonne: Die Katharer, it comprises merely four tiles; however, Der Tunnel also includes two tokens for each player. To summarize the incredibly short rules, in addition to your normal tile and optional follower placement, you may place one of your tunnel chips on any exposed tunnel entrance on the table, regardless of whether it's on the tile you just played. Once both your tunnel chips are out there, they connect the two roads, wherever they might be. For bonus fun, you can even do this to tunnels portrayed on tiles in other expansions. 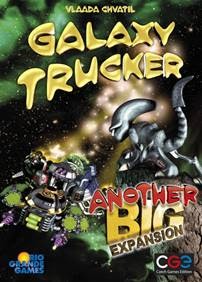 RIO465
Galaxy Trucker Expansion 2
$49.95 SRP
2-5 Players
Ages 10+
90 Minutes
Galaxy Trucker: Another Big Expansion is just as big as the Big one – New tiles. New Support team to be hired to enhance your shipbuilding experience. New ship classes, including huge IVB ships.
Yes, you may also fly round IV, and you can be sure the cards are extra nasty there – especially the intruders that board your ship, wander around, and eat or blow up your stuff, unless your heroic crew beats them. Wait... that's a different game, right? Aren't we speaking rather about Space Alert now? Well... it seems this "let's board a ship and eat its crew" mode spreads prety fast in the known universe these days, as with this expansion, it can happen also in Galaxy Trucker. 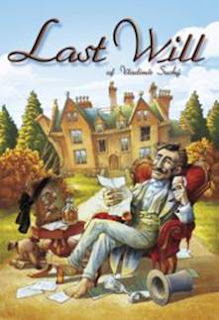 RIO464
Last Will
$49.95 SRP
UPC 655132004640
In his last will, your rich uncle stated that all his millions will go to the nephew who can enjoy money the most. How did he want to find this out? Each player is given a large amount of money and whoever can spend it first will be the rightful heir. Visit the most exclusive theaters or eat in the most expensive restaurants. Buy old properties for the price of new ones and sell them as old ruins. Host a huge party in your mansion or on your private boat. Spend like your life depends on it. Spend to become rich! 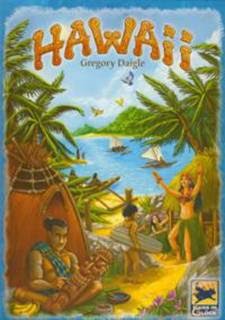 RIO469
Hawaii
$44.95 SRP
UPC 655132004695
The sun, the wide-open sea, and a gentle breeze
Five Hawaiians are enjoying the beach and the sun and all agree that the most recent choice of chieftain was good and the title well earned. And, each brags that next time, he will be the one chosen. To demonstrate their worth, each vows to build the most beautiful village on the island.
In Hawaii the players play the game on a variable game board that is different for each game. Thus, the players must adjust their strategies to the board each game in order to be successful. The player who manages to find the best tactics for the board offered will win the game and the admiration of the other players. The players will need to decide when and what to build, when to buy, and when to wait.
Hawaii - a variable game experience for up to 5 islanders.
Posted by ACD Distribution at 9:00 AM