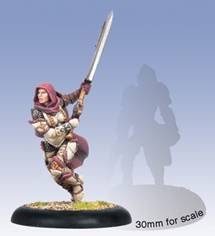 PIP32076
WM:Meno, Nicia, Tear of Vengeance
$12.99 SRP
January 11th Street Date
The widow of a proud Menite soldier, Nicia hopes only that by the time she meets her own inevitable, bloody death she will have killed enough unbelievers to join her husband at Menoth’s side. This peerless Daughter of the Flame strides through battle with lethal grace and speed, each movement gauged to bring her within striking distance. Even as she cuts through one foe, she fells another with cannon fire, wheeling her blade around for another kill. Few enemies have witnessed Nicia's murderous devotions and lived.
A player may field one Nicia, Tear of Vengeance in a Protectorate of Menoth army. 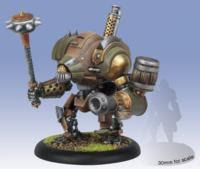 PIP41085
WM: Merc Mule/Nomad/Rover Heavy Warjack
$34.99 SRP
January 11th Street Date
Mercenary warjacks are often drawn from discontinued chassis once produced by kingdom armies. The Mule, a former Cygnaran warjack, wields a massive battle mace and an innovative steam-powered cannon packing enough explosive punch to scatter enemies like leaves. The Nomad, once a Cygnaran mainstay, has been battering enemy ’jacks with its battle blade for 150 years. The Rover was built specifically for mercenary use, and its battleaxe and shield-mounted cannon have turned the tide of many a battle. Mercenaries maintain these battle-tested machines and find them fully capable of standing toe-to-toe against any fresh from the assembly line.
This box set contains three color stat cards and one multi-part heavy warjack plastic model (PIP 41085). Included are all the components to assemble one of three heavy warjack variants: Mule, Nomad, or Rover. A player may field any number of these heavy warjacks with a Mercenary warcaster.
SPECIAL NOTE: PIP 41085 contains the same Mk II stat cards as PIP 41013 and PIP 41019 as well as one completely new stat card for the Rover. The model in this box represents the same figures as PIP 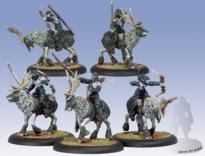 PIP73071
Hordes: LoE Blighted Nyss Raptors Cavalry
$89.99 SRP
January 11th Street Date
Nyss raptors hunted from atop their swift and sure-footed ulk long before the rise of Everblight. Now these killers ride ahead of their approaching comrades to tear apart enemy flanks with flashing swords, wreck formations with unerring flights of black-fletched arrows, and let their blighted steeds eagerly slash and impale with their massive antlers.
A player may field one unit of Blighted Nyss Raptors for each warlock in a Legion of Everblight army.
SPECIAL NOTE: PIP 73071 contains the same Mk II stat card as PIP 73024. The models in PIP 73071 are the same models as are in PIP 73024 and 73025 and replace those older PIPs by offering their contents in a complete unit. The replaced PIPs will no longer be available from Privateer Press beginning January 1st, 2012. 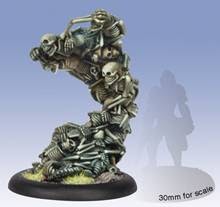 PIP75038
Hordes: Minions Boneswarm Light Warbeast
$18.99 SRP
January 11th Street Date
The boneswarm is an undulating mass of osseous debris given horrid life and animation by lingering necromantic energies in places where many have died. Gatorman bokors have learned to control these horrors, directing them to envelop foes in a mass of biting, toothy skulls. The bones of its slain victims are incorporated into the boneswarm itself, allowing it to heal damage and grow stronger and more resilient.
A player may field any number of Boneswarms in a Blindwater Congregation army or a WARMACHINE or HORDES army that contains a gatorman battlegroup.
NO
IMAGE
AVAILABLE
PIP41092
WM: Merc Rocinante Heavy Warjack Character Upgrade Kit
$ TBD
January 11th Street Date
Rocinante has served as the faithful companion for warcasters of the Damiano family for over a hundred years, and its gleaming armor is festooned with gilt scrollwork bearing such ancient family mottos as “Blood Shines Gold.” In battle, the towering warjack hacks down foes with its massive battle blade or blasts them to pieces with its great cannon.
The Rocinante Character Heavy Warjack Upgrade Kit is NOT a complete model. Players will need a Mercenary Heavy Plastic Warjack Kit (PIP 41085) in addition to this kit. A player may field one Rocinante in a Mercenary army. 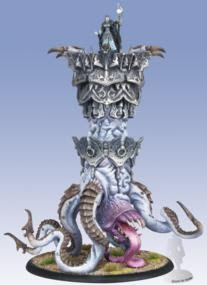 PIP73064
Hordes: LoE Battle Engine
$94.99 SRP
January 25th Street Date
Towering above Everblight’s legions are nightmarish creatures of writhing tentacles made possible only through the dragon’s will and power. From their positions atop these monstrosities, sorceresses rain down blighted magic upon the enemies of their master, freezing flesh with chilling frost or bursting bodies with explosions of razor-sharp spines. Those foolish enough to engage a Throne of Everblight in hand-to-hand combat are grabbed up by the blighted horror’s tentacles and pulled into its vast draconic maw to be devoured whole and screaming.
A player may field up to two Thrones of Everblight for each warlock in a Legion of Everblight army.
NO
IMAGE
AVAILABLE
PIP34083
WM: Cryx, Iron Lich Overseer Solo
$ TBD
January 25th Street Date
Forged from the consciousness of a trio of venerable iron liches, the overseer exists to command thralls and machines in the field. It slowly turns as the battle unfolds to allow each of its three faces to survey the enemy as it unleashes volleys of soul-claiming arcane fire, all the while hissing commands to the helljacks that follow it to war.
A player may field up to two Iron Lich Overseers for each warcaster in a Cryx army.
Posted by ACD Distribution at 9:00 AM