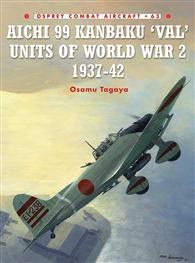 OSPCOM063
Aichi 99 Kanbaku Val Units of WWII
$22.95 SRP
UPC  9781841769127
The Aichi Type 99 Carrier Bomber (D3A) – code named ‘Val’ by Allied intelligence – was the mainstay of the Imperial Japanese Navy’s carrier dive-bomber force from 1941 to 1943. It sank more Allied warship tonnage than any other Axis aircraft during World War 2. While the Val’s participation in the major carrier battles has been widely covered in other English language sources, details of its operations have received scant attention in English. This book explores the Val’s combat operations. Color illustrations and photographs complement the development of dive-bombing methods in the IJN. 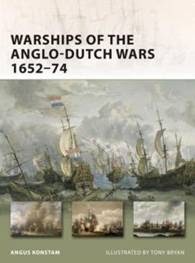 OSPNVG183
Warships of the Anglo-Dutch Wars 1652-74
$17.95 SRP
UPC 9781849084109
During the 17th century England and Holland found themselves at war three times, in a clash for economic and naval supremacy, fought out in the cold waters of the North Sea and the English Channel. The First Anglo-Dutch War (1652-54) pitted the Dutch against Oliver Cromwell's Commonwealth Navy, which proved as successful at sea as his New Model Army had been on land. Following the Restoration of 1660 the two maritime powers clashed again, and in the Second Dutch War (1665-67) it was the Dutch who had the upper hand. They humiliated the English by burning their fleet in the Medway (1667), forcing Charles II to sue for peace. This peace proved temporary, and the Third Dutch War (1672-74) proved a well-balanced and bitterly-fought naval contest. The Royal Navy eventually emerged triumphant, establishing a tradition of naval dominance that would last for two centuries. This was a revolutionary era in several key areas - warship design, armament and in naval tactics. In effect the ships and fleets that began the conflict in 1652 were by-products of an earlier age - warships designed to fight chivalrous duels with their enemy counterparts. By the close of the Third Dutch War these warships had evolved into fully-fledged ships-of-the-line - the warships that would dominate the age of fighting sail until the advent of steam. This book traces the development of these warships during this critical evolutionary period in naval history, and shows that while both sides evolved their own doctrines of warship design and armament, it was the English notion who created a battle-winning navy of sailing ships-of-war. 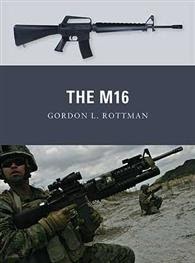 OSPWPN014
The M16 (SC)
$17.95 SRP
UPC 9781849086905
The M16 was first introduced in 1958 and was revolutionary for its time as it was made of lightweight materials including special aluminum and plastics. It was first adopted by US Special Forces and airborne troops in 1962 before it was issued to Army and Marine units serving in Vietnam. Its use spread throughout the following decades and a number of variants including submachine and carbine versions were also fielded. As a result it is now amongst the three most used combat cartridges in the world while over 10 million M16s and variants have been produced making it one of the most successful American handheld weapons in history. But despite its undeniable success the M16 is not without its detractors. Indeed, the “black rifle”, as it is known, is one of the most controversial rifles ever introduced with a long history of design defects, ruggedness issues, cleaning difficulties and reliability problems leading to endless technical refinements. This volume provides a technical history of the M16 and the struggle to perfect it together with an assessment of its impact on the battlefield drawing on over a decade’s combat experience with the rifle.
Posted by ACD Distribution at 9:00 AM