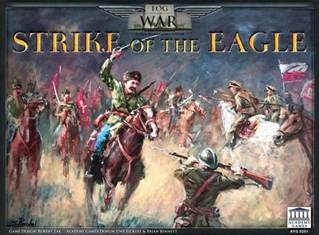 AYG5251
Strike of the Eagle
$ 65.00 SRP
Strike of the Eagle is a strategy game that simulates the tenseness of the Polish-Soviet War of 1920. This war featured a return of sweeping cavalry attacks combined with new weaponry innovations such as planes, tanks and armored cars. Gone was the static trench warfare of WWI where front line changes were measured in yards. Instead, the gains of this war’s campaigns were measured in hundreds of miles from Kiev and beyond Minsk in the east, to Warsaw and the German border in the west.
Strike of the Eagle is the first game in the new Fog of War series. This series covers pivotal wars of different eras, allowing players to relive and learn about the struggles that took place. The heart of this unique series lies in players placing secret orders on the map during each turn to bluff, mislead, misdirect and outplay their opponents! The orders are then revealed and executed by the player’s armies that are represented by wooden blocks of Brigade and Division strength forces of between 1500 to 8000 men. The exact composition of a player’s forces is kept hidden from their opponent until battle is engaged.
Contents:
Posted by ACD Distribution at 1:21 PM