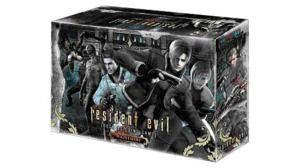 BAN23804
Resident Evil DBG: Nightmare
$29.99 SRP
NPI
UPC 045557238049
The RESIDENT EVIL DBG brings the story to life in a game of strategy where players construct their cards decks while they play.
Choose to play as one of your favorite characters from RESIDENT EVIL and start with only the most basic of items and weapons. As the game progresses, players build their arsenal with additional Weapons, Ammunition, Action or Item cards to customize their deck and improve their ability in defeating “the Infected”!Your deck will be your lifeline to survival. How will you survive the zombie outbreak?
RESIDENT EVIL DBG: NIGHTMARE is an expansion set that can only be played with either the first Resident Evil DBG or Resident Evil: Alliance.
New cards such as Luis Sera, Sergei Vladimir, Mine Thrower will help add to the excitement of the four existing Modes of play: STORY, VS., MERCENARY and OUTBREAK. However, the nightmare is only beginning when the Infected Osmund Saddler makes his appearance! Posted by ACD Distribution at 8:00 AM