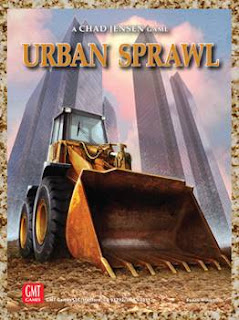 GMT1116
Urban Sprawl
$70.00 SRP
2-4 Players
Ages 12+
180 Minutes
Urban Sprawl abstractly models the growth of a town into a teeming metropolis.
Players assume the roles of entrepreneur, tycoon and politician—each helping in the development of a hypothetical “Anywhere, USA.” Wealth and Prestige will be earned and spent throughout the game. Buildings will rise only to later be demolished for better and larger fare.  Throughout the game, players will gather valuable Permits. These will result in either a wealthy Investment or the foundation of a new building Contract. Players will strive to become dominant in one or more building Zones in order to acquire beneficial political offices.  All of this eventually leads to the end game – a vibrant metropolis that is revered around the world – when the player with the most Prestige will be crowned the winner.

GMT1115
C&C Ancients Exp#6: Spartans
$55.00 SRP
We are Sparta… More than a line from a movie, The Spartan Army is the sixth expansion for the Commands & Colors: Ancients game system.
The Spartan Army expansion features over 20 scenarios, which focus on a period of time from 669 BC to 338 BC. In the early battles of Sparta against Argive, we see the development of Hoplite armies. We then move onto the war with the Persian Empire and take a closer look at the battle of Thermopylae, 480 BC. During the Peloponnesian Wars, Sparta takes a leader position among the Peloponnesian states, which would last for almost two centuries. Finally there is a shift in power away from Sparta during the battles of the Theban Era and the rise of Macedon.
The Spartan Army expansion also provides all the blocks and stickers needed to field a Spartan Army and its allies to oppose the armies from Commands & Colors: Ancients - Expansion #1 - Greek vs Eastern Kingdoms. As well as one sheet of 15 new double sided Terrain Tiles 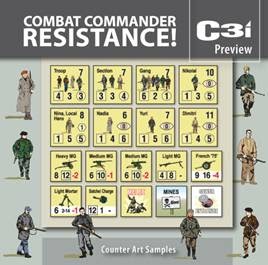 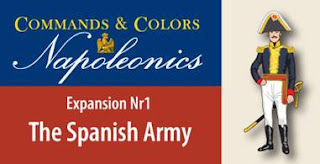 GMT1114
C&C Napoleonic Exp#1: Spanish Army
$50.00 SRP
The Spanish Army is the first expansion for Commands & Colors: Napoleonics.
At the time of the Napoleonic Wars, Spain was only a shadow of its former power. Spanish troops and leaders, as many Napoleonic historians point out, performed badly on a large number of occasions. Yet there are a number of battles, Bailen, Tamames, Alcaniz and San Marcial where the Spaniards fought valiantly and gained victory. Ironically, the point most historians overlook is the fact that the Spanish armies constituted a threat that the French simply could not ignore. As good as Wellington’s Anglo-Portuguese field army was, that army faced multiple French armies. They could only defeat one French army at a time. The Spanish Armies and the accompanying guerrilla warfare against French troops tied down the remainder, allowing the Anglo-Portuguese army to ultimately emerge victorious.
In this expansion you will find 18 historical scenarios that focus on Peninsular battles fought by the Spanish army from 1808 to 1813, plus all the new units you’ll need to field for these engagements.
Posted by ACD Distribution at 9:00 AM