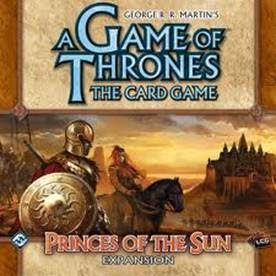 FFGGOT50E
GoT: LCG: Princes of the Sun Revised Ed.
$29.95 SRP
The Princes of the Sun reprint for A Game of Thrones: The Card Game, marked with “Revised Edition” on the front of the box, now includes three copies of each of the 60 unique cards included in the original printing.
Featuring the defiant and treacherous vengeance-seekers of the Dornish sands, Princes of the Sun offers players a full play set with which to immediately begin competitive House Martell deck-building. Also included is an intriguing “Civil War” game variant that lets players compete for the limited resources of a single deck. House Martell excels at icon manipulation, the production of influence, and in vengeance: to do well against this House is asking for punishment.
Princes of the Sun showcases House Martell’s counterintuitive win strategy, “winning through losing.” That is, this strategy comprises of letting your opponents win certain challenges in order for you to win others or take some other benefit. Get ready to have a bloodthirsty response to House Martell’s slights with Princes of the Sun! 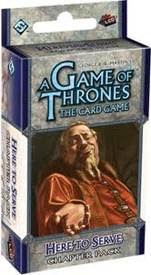 FFGGOT73
GoT: LCG: Here to Serve Chapter Pack
$14.95 SRP
Prepare yourself for the conclusion of the Secrets of Oldtown cycle of expansions with Here to Serve for A Game of Thrones: The Card Game.
The sixth and final Chapter Pack introduces three copies each of twenty never before-seen locations, attachments, characters, events, and two plots, spread over all six of Westeros’ Great Houses.
These cards forge the final links in your Maester’s chain, transforming your Maesters into invaluable allies on your path to victory. Forge your Maester's chain with the Valyrian Steel Link and Brass Link attachments. The theme of these chain links is card advantage: while Valyrian Steel gives you the ability to draw more cards, Brass Link discards cards from your opponent's deck and denies him resources. Here to Serve also features two new plots that boost your strategy, allowing your characters to attack and defend without kneeling during intrigue challenges and raising the claim on intrigue challenges you initiate.
Here to Serve introduces a wealth of new deck-building possibilities, especially for decks that feature Maesters.

FFGMEC05
LotR: LCG: The Hills of Emyn Muil Adv Pk
$14.95 SRP
Having lost Gollum’s trail at the Carrock, then embarked on a mission of mercy to Rhosgobel, the heroes now come to the hills of Emyn Muil, where they have only one objective: to find Gollum.
The Hills of Emyn Muil is the fourth Adventure Pack in the Shadows of Mirkwood cycle of expansions for The Lord of the Rings: The Card Game! The hunt for Gollum continues in this exciting expansion, which includes a Quest card and its related Encounters, as well as new Hero, Attachment, and Ally cards. This engaging Adventure Pack contains the first ever singlecard quest, in which players must gather victory points by exploring a wide range of dangerous locations.
With 60 new cards for The Lord of the Rings: The Card Game, The Hills of Emyn Muil will augment existing decks while providing players with entirely new challenges for their heroes. Can you scour Emyn Muil and determine Gollum’s whereabouts before it’s too late? 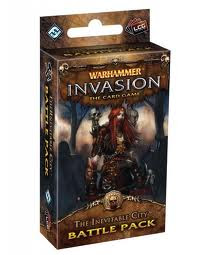 FFGWHC23
WH LCG: Invasion: The Inevitable City
$14.95 SRP
Built of dark madness, the Inevitable City is a monument to the will of the Ruinous Powers. It challenges the sanity of all who would travel its twisted streets, let alone definitively determine its location. So when an ill-fated scouting party tracks a band of brutal raiders through corrupted lands, one man will discover too late the folly of his mission.
The Inevitable City is the first Battle Pack in The Capital Cycle for Warhammer: Invasion The Card Game. With half of its 60 cards (three copies each of 20 unique cards) devoted to the corrupting forces of the Ruinous Powers, The Inevitable City is an invaluable Battle Pack for players of the Chaos faction. Additionally, players of other factions will find a variety of useful tactics, units, and support options. 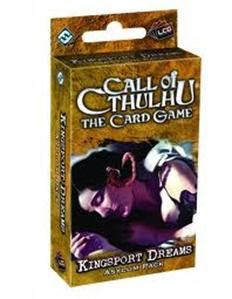 FFGCT13E
CoC: LCG: Kingsport Dreams Asylum Pk 2E
$14.95 SRP
Once again emerging from the deepest shadows comes Kingsport Dreams, another classic Asylum Pack in the Forgotten Lore cycle of expansions for Call of Cthulhu: The Card Game!
Kingsport Dreams reintroduces this intriguing Asylum Pack, updated to the 60-card per pack format (3 copies each of 20 unique cards). In addition, the text on a number of cards has been altered from its original printing to better adjust for game balance and rules clarity, making for an exciting and challenging gaming experience for both new players and veterans alike. Take a tour through Kingsport's most interesting locales and meet its charming - sometimes literally so - denizens. Each of Call of Cthulhu's factions will find someplace to call home in Kingsport.
Also featured in Kingsport Dreams are a curious cast of characters, including Sorcerors Thomas Olney and Mentor to Vaughn (designed by 2006 Call of Cthulhu World Champion Chris Long), as well as two new Ancient Ones, Nodens and Tulzscha, and doomed necromancer Charles Dexter Ward. 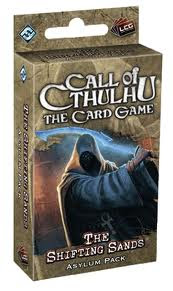