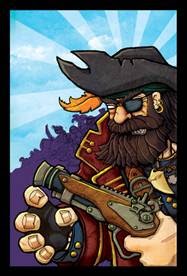 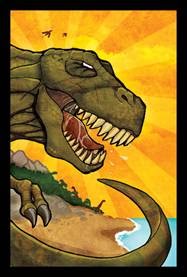 JOL1600
Pirates vs. Dinosaurs
$60.00 SRP
2-5 Players
Ages 11+
90 Minutes
Pirates vs. Dinosaurs is a game for 2-5 players by Richard Launius (designer of Arkham Horror) in which players control pirate captains and their cutthroat crews, all with partial knowledge of the whereabouts of buried treasure on a forgotten Pacific island.
The catch? They don't know the island is the final home of dinosaurs, survivors of millions of years, and they aren't happy to let outsiders explore their island. Of course, the pirates also don't know that the island is sinking or that there are other pirates looking for the same treasure. Who will get away with the most loot and become the pirate remembered by history?
Before the game, players outfit themselves with a variety of crew, weapons, and gear before choosing the section of the island that they will explore, knowing that the jungle takes longer than the beach as they look for their parts of the map. The search can be interrupted as other players play dinosaur (and other) cards to cause mayhem and carnage. Once the treasure is located, players draw treasures from a bag, looking to avoid the pirate ghost and island sinking events, and return safe to their ship--a question of how far they'll go in pushing their luck.
Posted by ACD Distribution at 2:34 PM