FFGNAD01
Android: Free Fall
$8.99 SRP
It is the future, and while the world has changed, crime has not. When an influential lawyer is brutally murdered at the top of the Beanstalk, a towering exoatmospheric elevator serving as Earth’s hub of interplanetary trade, Captain Rick Harrison reluctantly accepts the case. Harrison’s investigation soon leads him from the sprawling megapolis of New Angeles to the distant moon base of Heinlein, where he must search for clues amongst an uncooperative assortment of bioroids, clones, and disgruntled human laborers.
But Harrison quickly finds himself at the center of an ever-deepening conspiracy. Why did the killer apparently use a mining laser, an unwieldy weapon? What is the true connection between the victim and a powerful anti-android lobby? And on the hunt for a killer, a hardened cop is faced with the one question he never expected: What is the true definition of humanity?
Free Fall is the first novel based on Fantasy Flight Games’s Android, conveying a dystopian world of technology and corruption. This rich universe is masterfully brought to life by New York Times Bestselling author William H. Keith, winner of the H.G. Wells Award and multiple Origins awards, and the celebrated author of over 150 novels, short stories, and other published works. 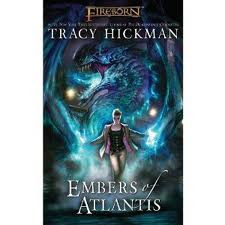 FFGNFB01
Embers of Atlantis
$8.99 SRP
Powerful scions walk the streets of modern London, oblivious to their true nature. Unknowingly, they carry within them the spirits of reincarnated dragons from an age of high fantasy. As magic begins to emerge once more in the 21st century, long-dormant memories begin to flood the minds of these scions, reminding them of their mystical heritage.
Welcome to the world of Fireborn. Ethan Gallows knows things about his world. He knows there is magic, and he knows he wants nothing to do with it. Yet when he is sent on the seemingly menial job of filming a museum curator’s antique art collection in London, Ethan discovers that he has much more to learn. After witnessing a violent display of sorcery, ancient memories come rushing back to Ethan - memories seen through the eyes of a dragon. With minions of the Taint now seeking him for their own twisted purposes, Ethan must put his trust in Sojourner - a woman claiming to be a draconic scion. Could he really be a dragon of old, or is this some sort of fanatic conspiracy? There’s only one way for Ethan to find out.
Embers of Atlantis is the first novel based on the acclaimed Fireborn roleplaying game setting. Written by New York Times bestselling author Tracy Hickman (Dragonlance), Embers of Atlantis introduces readers to a modern world faced with the sudden emergence of magic.

FFGNAH01
Arkham Horror: Ghouls of the Miskatonic
$8.99 SRP
It is the roaring twenties – a time of jazz and gin... but a shocking murder has upset the tranquility of the small town of Arkham, Massachusetts. When the mutilated body of a student is found on the grounds of Miskatonic University, the baffled authorities struggle to determine who – or what – is responsible. When two more students go missing, is it the work of the same killer, or something much darker? While a Miskatonic professor seeks answers in the ramblings of an insane former colleague, nightmares of a terrifying sunken city plague his most gifted student.
Meanwhile, a down-on-his-luck reporter trawls the dark underbelly of the town for clues, and a bootlegger escapes a deal gone horribly wrong in possession of a strange, otherworldly device. Now, these unlikely investigators must come together to face horrors beyond comprehension as they seek answers to a mystery that threatens to destroy all they hold dear.
Ghouls of the Miskatonic is the first novel in The Dark Waters trilogy by New York Times Bestselling author Graham McNeill. Fans of Lovecraftian horror will be devoured by its gripping mystery, and Arkham’s dark legends will continue to haunt the imagination long after the final page is turned.
Posted by ACD Distribution at 10:08 AM