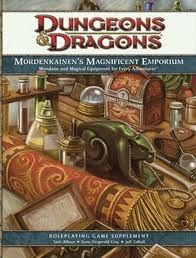 WOC280690000
D&D: Mordenkainens Magnificent Emporium
$29.95 SRP
Few wizards know more about magic than the mighty Mordenkainen, whose arcane achievements are without peer. He’s the Archmage of Adventure . . . and no stranger to unearthing hidden lore. Stand aside, Tenser! Back to the books, Otiluke! Few can match Mordenkainen’s collection of magic items. Still, he hardly seems the type to settle down and open a magic shop.
And yet . . . Welcome to Mordenkainen’s Magnificent Emporium, a wondrous collection of magic items—each one with a story to tell. This tome provides Dungeon Masters with a ready assortment of treasures to tempt greedy players, along with historical nuggets and alluring adventure hooks that set these items apart from your run-of-the-mill flaming sword or bag of holding.
This book adds rich flavor to the treasures and trinkets presented within, and a dash of inspiration for Dungeon Masters looking to liven up a monster’s trove. Hold on to your magic hats—everything must go! 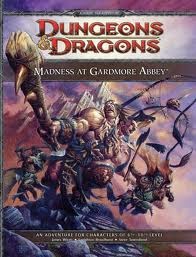 WOC355930000
D&D: Madness at Gardmore Abbey
$39.99 SRP
A thrilling heroic-tier adventure for characters of levels 6–10. This deluxe adventure takes heroes into the ruins of Gardmore Abbey, a monastery that was once the base of a militant order of paladins devoted to Bahamut. According to legend, the paladins brought a dark artifact back from a far crusade and stored it in their abbey for safekeeping, and evil forces gathered to assault the abbey and take it back.
What the legends don’t tell is that this artifact was actually the Deck of Many Things, a force of pure Chaos. This adventure brings characters into the extensive dungeons beneath the ruins—dungeons that are warped and twisted with the raw forces of Chaos surrounding the cards of the deck.
Included:
Posted by ACD Distribution at 11:45 AM