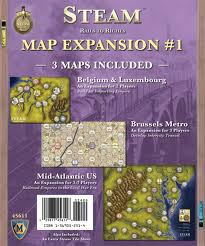 MFG45611
Steam: Map Expansion #1
$24.00 SRP
The first of Mayfair’s expansions to Steam.
Offering three tracks in the same pack! One side has a map of the Mid-Atlantic United States. The other side has two maps: Belgium & Luxembourg and the Brussels Metro. These boards are sure to challenge Steams players with their region-specific rules and challenging topography.
3 MAPS INCLUDED-
Belgium & Luxembourg: An Expansion for 2 Players, Build an Importing Empire.
Brussels Metro: An Expansion for 3 Players, Develop Intercity Transit.
Mid-Atlantic US: An Expansion for 3-7 Players, Railroad Empires in the Civil War Era
Also Included: An Extra Steam Tile Sheet
Posted by ACD Distribution at 1:00 PM