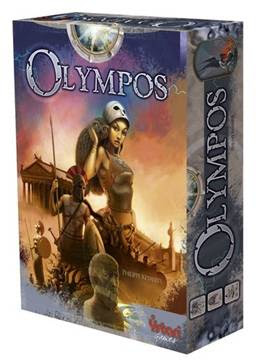 RIO452
Olympos
$54.95 SRP
3-5 Players
Ages 10+
90 Minutes
From the creator of Small World comes Olympos.
Players take actions based on their position on a time track, along the lines of Peter Prinz' Thebes. By spending time, players take actions, with the choices being expansion or development. Expanding brings new settlers onto the game board, which depicts Greece and Atlantis, which lets you conquer territories and thereby acquire resources.
Development takes place on the game's discovery board, with players either buying new scientific discoveries – such as medicine or phalanxes – or building architectural wonders. Each discovery brings you new powers, such as an upgrade in military strength due to the phalanx, and each wonder earns you points.
A player's piety is measured by discoveries, and the most pious player might be rewarded during the game by one of the nine gods included. Similarly, the less pious players might be punished by those same gods.
The replayability of Olympos is huge as the discovery board and gods in play will be different each game, not to mention the territories you're able to conquer.
Posted by ACD Distribution at 1:58 PM