Retailers please note that ACD is the ONLY authorized Hobby Market Distributor of Techno Source! Tetris Link is based on the popular video game: Tetris.
Players drop blocks known as Tetriminos into a grid. They attempt to link same-colored Tetriminos together to earn points, while simultaneously blocking opponents from doing the same. Points are earned by linking three or more Tetriminos together, but points are deducted for leaving empty spaces in the tower grid.
The game ends once the tower is completely full. 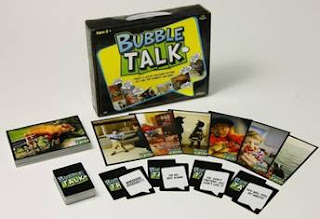 TOS0900
Bubble Talk
$19.99 SRP
3-10 Players
Ages 8+
Bubble Talk is a new fast-paced family board game that asks players to match hilarious captions with funny pictures. A game that is as much fun if you are 8 or 80, the game begins when each player draws seven random caption cards. The judge for that round draws a picture card and players must quickly try to match the funniest caption they have to the picture. The player who makes the judge laugh the most wins that round. Each round provides comical, clever and creative results, guaranteed to keep everyone in the group laughing. Perfect for a small group of three or as many as eight players, each game includes 150 picture cards (4”x 6”) and 300 hilarious caption cards that allow for hours of game play.
Good Housekeeping – Winner of Best Toy Award 2010
Dr. Toy - Best Vacation Product Award Winner 2010;
Mom's Choice Award - 2010 Gold Recipient
Posted by ACD Distribution at 1:45 PM