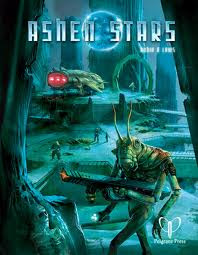 PELGA01
Ashen Stars (Gumshoe Sci-Fi RPG)
$44.95 SRP
Ashen Stars is the newest full-length, stand-alone GUMSHOE product from RPG legend, Robin D. Laws.
They call you lasers. Sometimes you’re called scrubbers, regulators, or shinestars. To the lawless denizens of the Bleed, whether they be pirates, gangsters or tyrants, you’re known in less flattering terms.
According to official Combine terminology, the members of your hard-bitten starship crew are known as Licensed Autonomous Zone Effectuators. You’re the seasoned freelancers local leaders call when a situation proves too tough, too baffling, or simply too weird to handle on their own. In the abandoned fringe of inhabited planets known as the Bleed, you’re as close to a higher authority as they come. In this gritty space opera game, the PCs are Lasers, freelance troubleshooters and law enforcers operating in a remote sector called the Bleed. They’re needed in the wake of a massive retreat by the Combine, the Utopian empire that colonized it. Amid the ashes of a devastating war, the lasers solve mysteries, fix thorny problems, and explore strange corners of space—all on a contract basis. They balance the immediate rewards of a quick buck against their need to maintain their reputation, so that they can continue to quickly secure lucrative contracts and pay the upkeep on their ship and their cyber- and viroware enhancements.
Featuring seven new and highly detailed playable species, Ashen Stars also contains extensive, streamlined rules for space combat, 14 different types of ship, a rogues gallery of NPC threats and hostile species’ and a short adventure to get you started in the Bleed.
Posted by ACD Distribution at 9:45 AM