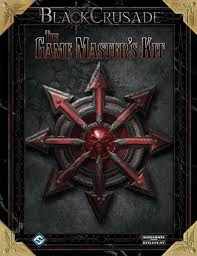 FFGBC02
Black Crusade: GM Kit
$19.99 SRP
Guide your players down the path of Chaos with The Game Master’s Kit for Black Crusade!
This helpful resource features a sturdy Game Master’s screen, displaying stunning Black Crusade art on one side and a wealth of useful quick references on the other. In addition, The Game Master’s Kit includes a 32-page booklet with a full adventure and a score of helpful GM tips, like how to run campaigns past their usual narrative thresholds and how to easily manage each player’s Infamy and Corruption.
Challenge your players with the included adventure, which takes a group of Heretics to the shattered ruins of an infamous pirate empire. While there, the Heretics will begin a race for power against ruthless competition. Gather clues, coerce the local populace, and deal with the planet’s fickle overseer, and you’ll earn the favor of your dark masters. 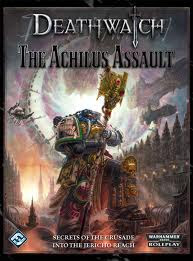 FFGDW06
Deathwatch: Achilus Assault
$39.95 SRP
The Achilus Assault is a sourcebook for Deathwatch, and it includes descriptions of the fires of war raging in the Jericho Reach, from the numberless tides of the Tyranids in Hive Fleet Dagon to the hellish legions of Chaos pouring forth from the Hadex Anomaly and the expansionist aggression of the Tau Empire.
The threats presented in this tome provide Game Masters with a surfeit of antagonists and mysteries to confront a Deathwatch Kill-team. With this thorough resource, players can learn about the Jericho Reach’s most significant warzones and plan new Deathwatch missions of vital importance to the Crusade. Learn about the major threats to the Crusade’s advance, including foes that can be reasoned with and those that must be annihilated. With new NPCs, adventure seeds, and player options,
The Achilus Assault brings your campaign to the front lines. 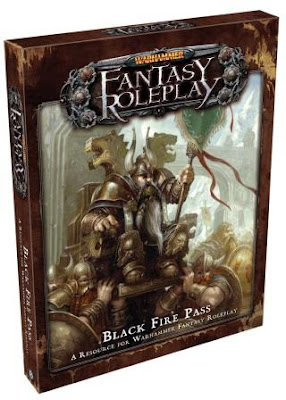 FFGWHF17
WHFRPG: Black Fire Pass
$39.95 SRP
The alliance between dwarfs and men has lasted since the time of Sigmar, forged in blood at the Battle of Black Fire Pass. A disturbing place of sharp black glass and noxious mists, Black Fire Pass has been fraught with peril and opportunity throughout the long history of the Empire. What dangers and riches does it hold for you?
Black Fire Pass is a supplement for Warhammer Fantasy Roleplay, with a wealth of information concerning dwarfs, the hold of Karak Azgaraz, and Black Fire Pass itself; this comprehensive expansion is a must-have addition for fans of these stout and stoic warriors. The Book of Grudges features rules for runesmithing, dwarf engineering, ten brand-new dwarf careers, and much more!
Also included in the box are detailed information on the history and geography of Black Fire Pass itself, with adventure and episode ideas for GMs and a complete adventure set within its dangerous confines. When friend becomes foe, thunder will reign in the mountains.
Posted by ACD Distribution at 2:00 PM