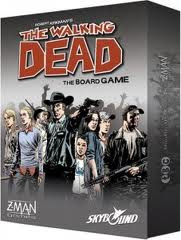 ZMG7087
The Walking Dead
$39.99 SRP
Based on the hit comic book!
Enter the world of Robert Kirkman’s The Walking Dead!
Each player takes on the role of a survivor in a world full of zombies.  With only one companion at the start of the game, each player must struggle to gather resources, find other survivors, and eventually find a refuge from the zombies that have taken over the landscape. Can you find enough resources and scout enough locations to find a safe haven to escape to?
There is a choice of 6 main characters to play, whose standups are included as you move in and around Atlanta, trying to locate safe havens from the zombies. Custom dice are included in the game. 7 new pieces of art are in the game. The game can be played solo as well as cooperative. For 1-6 players. 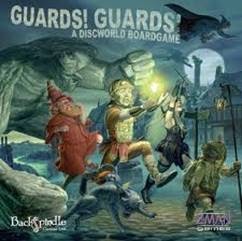 ZMG7089
Guards! Guards!
$49.99 SRP
Guards! Guards! is an action packed, fast paced adventure set in the streets of Ankh-Morpork, the Discworlds oldest, grubbiest and least law-abiding city.
Secret societies, rampaging trolls, drunken dwarves, cut throat street sellers and an 800 pound set of luggage thundering around the city on a hundred tiny legs. Players will need wits and strategy just to survive the day, never mind returning the stolen Great Spells to the Unseen University®
Posted by ACD Distribution at 11:00 AM