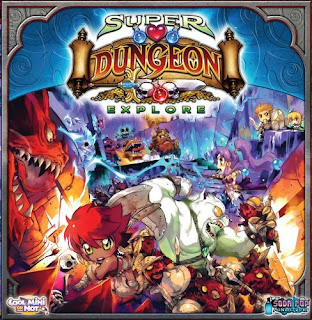 CMNBG01
Super Dungeon Explore
$89.99 SRP
2-6 Players
Ages 10+
90 Minutes
Super Dungeon Explore is an expandable strategy board game for 2 or more players, combining the fun of traditional dungeon crawls, with a unique retro arcade/video game feel, featuring authentic CHIBI anime heroes battling hordes of minions and huge monsters in a dungeon full of traps and treasure.
One to five players take the role of classic fantasy heroes like the human paladin, a dwarf fighter or an elf ranger. One player is the "Dark Consul" to control the monsters of the dungeon.
Every hero/monster has a character card which informs you about the stats for movement, attack, armor, willpower, dexterity, actions points and hearts (= life points). Additional information may include special abilities / actions / attacks and potions.
The game is played on modular dungeonboards. In a round of play the game passes back and forth between single heroes and the monsters, but the exact order may change from round to round. The characters use the stats from their character card, special dice (with hearts, potions and stars) are only used for combat and checks. If the heroes wound the opponent they may draw loot cards to improve their stats. There is also the possibility to open treasure chests to find even more powerful things. The monsters have no possibility to "level up" but the Dark Consul has an unlimited number of them.
To win the game the Dark Consul must defeat all heroes in his dungeon. The heroes must defeat all monsters and destroy all spawning points (= entry points for new monsters) to be victorious.
Posted by ACD Distribution at 2:12 PM