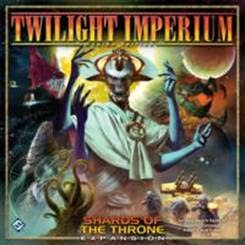 FFGTI05
TI: Shards of the Throne
$59.95 SRP
The legacy of a ruined empire silently echoes across the stars, its presence still felt as a timeless entity. It is hope. It is a promise. It corrodes the dreams of a peaceful universe into visions of alluring conquest, propelling the entire galaxy into an endless struggle for power.
Shards of the Throne is an epic expansion for Twilight Imperium, adding new races, new units, and many new options to create an even more incredible power struggle in the far reaches of the galaxy. Mercenaries, Mechanized Units, and all-new Flagship units give players more options for customizing their fleets and Ground Forces, while the Political Intrigue option will crank up the agendas and espionage of the political phase.
Also adding Race-Specific Technologies, alternate Strategy Cards, new System Tiles, Space Domains, and an all-new scenario that puts one player in control of the legendary Lazax Empire, Shards of the Throne creates a completely new way to wage your galactic conquests! 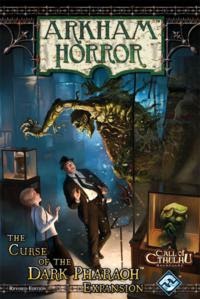 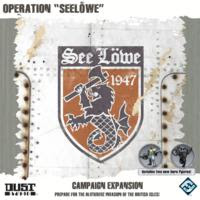 FFGDT015
Dust Tactics: Operation Seelowe
$39.95 SRP
The Allies are desperate; they face catastrophic losses across the coast of Great Britain. With the situation so dire, they have no choice but to split their focus, sending Her Majesty’s fleet to face the Axis Kriegsmarine in the Channel, and leaving the naval base at Scapa Flow defenseless...or so it seems. Operation “SeeLöwe” offers players eight new exciting scenarios that aren’t restricted by a fixed number of army points. New tiles introduce buildings into the game, offering players new tactical decisions in an urban environment. New rules and new super strong and inhuman heroes further immerse you into this stimulating expedition. Also included in Operation “SeeLöwe” is the untold history of the Axis and one of the cornerstones of their forces: the Blutkreuz Korps. Uncover truths known only to a select Axis few. Introducing a new level of strategy to your Dust Tactics gaming experiences, Operation “SeeLöwe” assures that the battlefield will never be the same. 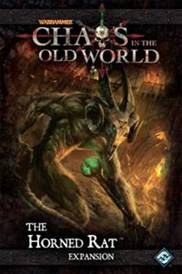 FFGGW04
WH: Chaos in the Old World: Horned Rat
$24.95 SRP
Below the Old World’s cities sprawls a vast network of tunnels, caves, and underground roads. Verminous Skaven skulk within this Under Empire, waiting for the perfect opportunity to rise from the warrens and destroy their enemies for the glory of their sinister god, the enigmatic Horned Rat. Even as the Ruinous Powers work to corrupt the Old World, the Skaven are ever scheming to further their own dark agenda.
The Horned Rat expansion for Chaos in the Old World introduces a fifth player to the race toward corruption! With beautifully sculpted playing pieces, all-new powers, and an array of exciting upgrades, the fearsome Skaven stand ready to scurry across the face of the Old World. Players of the existing Ruinous Powers can meet the foul vermin head on with a host of new gameplay options, including alternate upgrade and Chaos cards. Meanwhile, veterans will find engaging challenges with new expert-level Old World cards and gameplay variants. Prepare to join the battle for dominance! 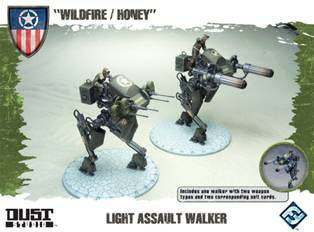 FFGDT017
Dust Tactics: Light Assault Walker
$24.95 SRP
The newest Allied Light Assault Walkers, Wildfire and Honey, provide players with a multitude of advantages. Wildfire, the light-weight robot created by Allied scientists, has a dreadful weapon system of four heavy machine guns that fire simultaneously, delivering a deluge of firepower that lights up the darkest battlefield. There is nothing sweet about Honey except for its name. With a new next-generation phaser weapon system, this anti-tank is ready to erase your enemy from the board.
Posted by ACD Distribution at 1:11 PM