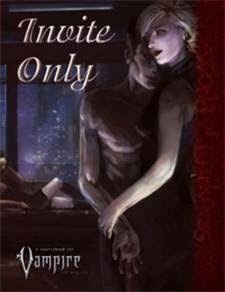 WWP25034
VtR: Vampire Invite Only
$14.99 SRP
Singular vampires are so many terrible things. Why should it be any different when many vampires get together? It isn't. In fact, it's exponentially worse. Kindred are designed to be solitary predators. Why they gather in such large groups is a complicated issue. Are they lonely? Do they need to keep enemies within arms' reach? Do they need to understand the other creatures that inhabit their homes? Do they believe in safety in numbers?
This book specifically addresses how to build an interaction. It's how to host a party, how to make a location and how to make a social structure. A chronicle book for Vampire: The Requiem. A handful of fully fleshed social hotspots you can plug into or adapt your chronicle. Play variants and tweaks, Merits, Devotions and other character items built around Kindred social gatherings. A handful of plug-and-play scenes in the SAS format. Options for a social combat system.
Posted by ACD Distribution at 4:41 PM