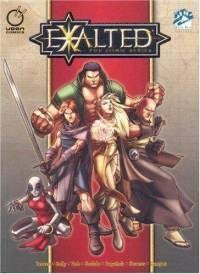 WWP80012
EX 2E: Exalted The Patchwork Scroll
$14.99 SRP
In Creation, everything has power Sometimes, Exalted writers produced quite a bit more than we expected. Over time, little scraps and fragments of materials and rules built up, and they seemed too cool to leave in the oblivion of a computer trash bin. Before we knew it, we had a lot of pieces with no home, and it seemed a shame just to throw the excess material away. So we decided to stitch them together into a crazy quilt of additional game pieces for your Exalted series into The Patchwork Scroll. A collection of Exalted Second Edition material.
The Imperfect Lotus contains eight supernatural martial arts styles, ranging from simple Terrestrial styles to powerful Celestial fighting arts Splinters of the Wyld provides new Wyld locations, Mutations, Derangements, creatures and characters Debris of the Fallen Races contains five martial art styles for Dragon Kings, Chaos Pattern Charms, and statistics for subterranean creatures Lost Arts of the Dead contains four new Arcanoi for ghosts.
Posted by ACD Distribution at 9:52 AM