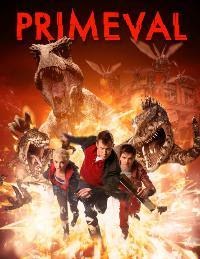 CB72000
Primeval Core Rulebook (HC)
$39.99 SRP
“Anomalies are starting to appear, doorways in time to worlds we can barely imagine. The anomalies are conclusive proof that the past exists in a fourth dimension as real and solid as those we already know. Our job is to predict and contain them.”
The past, present and future of Earth are colliding as mysterious anomalies open up everywhere. You are part of an elite team of specialists. Your mission – keep prehistoric monsters in check, preserve the timeline, and uncover the secrets behind the Anomalies. You must protect the modern world from savage dinosaurs, primeval monsters and the horrors of the far future, but not everyone's on your side. Who can you trust? Based on the hit TV show, Primeval lets you play as Nick Cutter, Connor, Abby and the rest of the Anomaly Research Centre team, or create your own groups of dinosaur hunters and time travelers. A billion years of danger and adventure awaits on the other side of the Anomalies!
This roleplaying game contains full rules for creating your own teams of investigators, battling dinosaurs, and making your own exciting stories. All you need is your imagination, a pair of six-sided dice, and your friends! 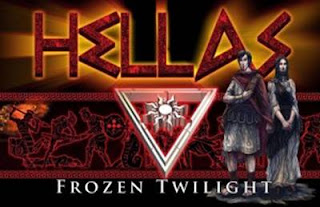 CB75911
Hellas: Frozen Twilight First Age Vol 3
$9.99 SRP
In Frozen Twilight takes the heroes from the frozen wastes of Echnidari, through the dark realm of Hadon, beyond it to Zoran space, and finally to a dark world at the edge of the known space where the heroes must face the Machina Prince Telemachus himself. Can the heroes discover the information they need to save the Galaxy while fending off a universe that seems intent on killing them?
In Frozen Twilight can be played as a standalone scenario or as part of the Legacy of the First Age campaign. 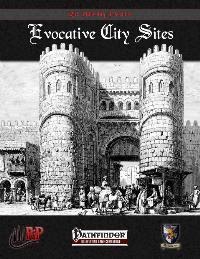 CB76801
PF: Evocative City Sites (PFRPG) (SC)
$19.99 SRP
Why settle for the same old taverns, bars, and town? Add some character to your city and make it Evocative!
This bundle of nine extraordinary places is sure to bring the adventure into the streets and alleyways with style. Sites include the Bedlam Asylum, Clockwork Tower, the Intimate Shape Brothel, Kavit M. Tor’s Emporium of Collectible Curiosities, Lorn's Entrepot (an abandoned warehouse), the Next Inn, the Rogue's Gallery Tavern, Voell's Garden, plus a funerary vault!
Each one comes packed with material, offering multiple maps— several fully detailed complex NPCs with statblocks drawing on multiple Open Gaming Content sources, story seeds and character secrets. Learn what hides within the Voell Garden, or unravel the chronomantic mystery of the Clockwork Tower. Face the madness within the Bedlam Asylum or discover the hidden contraband of Lorn’s Entrepot. Spend some ill-gotten gains in the Intimate Shape Brothel or browse the wide selection of wares at Kavit M. Tor’s Emporium. Rest and recuperate at the Next Inn, or seek out villains in the Rogues’ Gallery Tavern. Whatever you choose to do, make it Evocative! 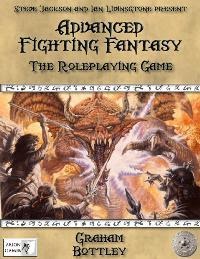 CB77001
AFF RPG: Advanced Fighting Fantasy (SC)
$29.99 SRP
The huge success of the Fighting Fantasy gamebooks spawned, in 1989, a full-blown Roleplaying game based upon the same fantasy world.
Originally published as three separate books, this classic game has now been revised, re-written and re-released for a new generation of gamers. Revised rules, brand new material and original illustrations combine to make this a classic RPG for the modern age.
The new version of Advanced Fighting Fantasy is perfect for original fans of the game, experienced roleplayers new to Fighting Fantasy and is ideal for those new to roleplaying. Onwards to adventure! 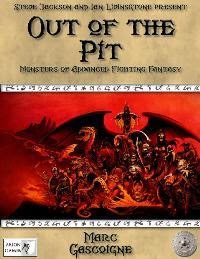 Out of the Pit they come!
From the darkest corners, from the deepest pools and from dungeons thought only to exist in nightmares come the Fighting Fantasy monsters – the downfall of many a brave warrior. Two hundred and fifty of these loathsome creatures from the wild and dangerous worlds of Fighting Fantasy are collected here – some are old adversaries, many you have yet to meet – each of them described in minute detail. An indispensable guide for Fighting Fantasy adventurers! 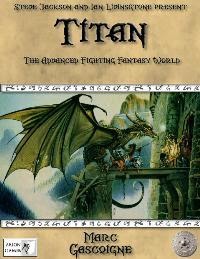 You met the monsters in Out of the Pit – now meet the rest of the Fighting Fantasy world!
No adventurer should be without this essential guide. Titan contains everything you need to know, covering the turbulent history of the world, from its creation and early civilizations – through the devastating War of the Wizards – to the present-day wilderness and anarchy where the delicate balance between Good and Chaos could at any moment be overturned... - Detailed descriptions and maps of Titan’s three main continents, Allansia, Kakhabad and Khul. - All the gods and deities…and demons! - The forces – and races – of Good and Evil - Special expanded Heirarchy of the Pit - The underwater kingdoms - The Titan calendar - Fascinating background information on everyday life: taverns and hostelries, food, clothes…even jokes! A mine of invaluable information is contained in this book. Make sure YOU are armed with a copy before you set off on your next Fighting Fantasy adventure!
Published in 1986, this classic guide to the world of Fighting Fantasy is the perfect companion to both Out of the Pit and the Advanced Fighting Fantasy Roleplaying game. Full of fascinating detail and interesting facts, this classic book is back for a new era. 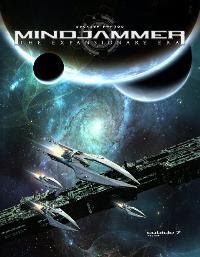 CB7713
SA: Mindjammer: The Expansionary Era SC
$29.99 SRP
“It was the Second Age of Space. The light of human civilization, which had flickered and threatened to die, suddenly burned bright again with contact with the thousand worlds of space. Humankind laughed, filled with the joys of the power of a new-found youth, and strode forth to bring its message of hope and regeneration to the stars...” – from the Songs of Old Earth, Book I Mindjammer:
The Expansionary Era is the ENnie-award winning far future transhuman setting for the Starblazer Adventures role-playing game, set in the strange and distant future of planet Earth. Enter a universe of lost worlds, hyper-advanced technologies, and clashing civilizations – a unique and compelling space opera setting of action and adventure!
This all-new edition of the Mindjammer setting has been updated and expanded to be compatible with the Starblazer Adventures Second Edition rules, and features all-new artwork, maps, and content, including: new species; advanced technologies; new – and sentient! – starships; the Mindscape; rules for cultural conflict; starmaps of Commonality Space with world maps and descriptions; an action-packed campaign of four linked adventures; and more! 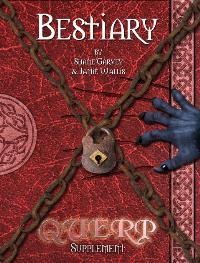 CB77301
QUERP Bestiary
$24.99 SRP
This Bestiary is the first supplement for QUERP - The game of Quick Easy Role Playing.
This tome contains nearly 100 monsters and enemies that devious Gamesmasters can use to distract and attack their players. Ranging from low power to extremely dangerous, the QUERP Bestiary provides monsters for every occasion, every environment and every group of characters. If it bites, claws, flies, roars, breathes fire, renders, and tears or eats you one bite… you will find in this book. This is not a stand-alone product.
The QUERP Bestiary requires a copy of the QUERP Core Rulebook published by Greywood Publishing.
Posted by ACD Distribution at 9:50 AM