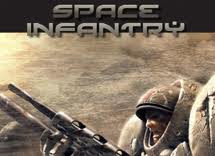 LLPSI01
Space Infantry
$54.99 SRP
NPI
1 Player
20 Minutes
Space Infantry (SI) is a solitaire game of squad-level combat in the future, pitting power-armored soldiers against an assortment of Aliens in a wide variety of missions and landscapes. In Space Infantry you control a team of 4/8 soldiers on a series of missions that can be played individually or as a campaign.  Each mission takes about 20 minutes to be completed.
SI is a modular game; the overall structure of SI will make possible to easily add new features to the game (missions, enemies, equipment): this means that in the future additional components will add new options to the existing missions, increasing the lifetime of SI.
This is a boxed game, featuring mounted mission maps (game boards), die-cut counters, immersive art, and much more.
Posted by ACD Distribution at 3:49 PM