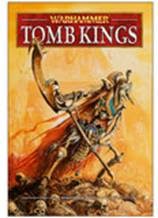 GAW94-01-60
WFB: Tomb Kings Army Book
$37.25 SRP
Far to the south of the Old World lies a desolate, wind-swept desert. No living thing stirs in this place, but it is far from uninhabited.  This is Nehekhara, the cursed Land of the Dead, and the Domain of the Tomb Kings.
This 96-page full-color hardback Warhammer Army book contains all the rules you need to field a Tomb Kings army, as well as detailed background information, bestiary, accompanying artwork and miniatures showcase. 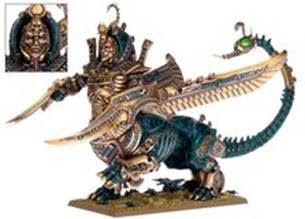 GAW94-09
WFB: Tomb Kings Khemrian War/Necrosphinx
$49.50 SRP
Khemerian Warphinxes are giant leonine statues that wade through the ranks of their foes, crushing them underfoot as if they were nothing more than bothersome insects. They are impervious to harm and their stone-hard hides protect them from all but the truest strikes. The Necrosphinx is a nightmare beast of destruction that glides through the air in bounding leaps before falling amongst their terrified prey, scything down the living as mortals reap the wheat of the field.
This multi-part plastic kit contains 88 components with which to build one Khemrian Warsphinx or one Necrosphinx. This set includes all the various weapon options and upgrades that the monsters can take, as well as a Tomb King that can choose a Warsphinx as a monstrous mount. 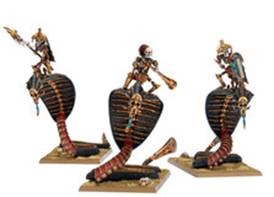 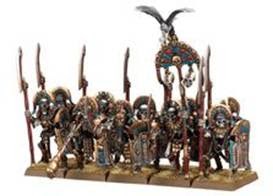 GAW94-12
WFB: Tomb Kings Tomb Guard
$41.25 SRP
The Tomb Guard are the partially mummified remains of the king's elite guard. In battle, they form unwavering ranks of armored warriors. They have spilled the blood of their enemies for countless centuries, and numerous armies have been dashed against their implacable shield walls.
This multi-part plastic set contains 88 components to construct 10 Tomb Guard, and includes enough parts to create a command section as well as variant weapon options.
**No Image Available**
GAW94-13
WFB: Tomb Kings Battalion
$120.00 SRP
This battalion boxed set provides a great selection of models, and is an ideal way to start a Tomb Kings army or bolster an existing army.
Posted by ACD Distribution at 9:47 AM