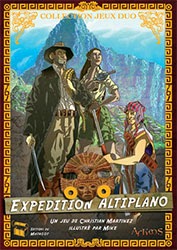 ASMALP01US
Expedition Altiplano
$19.99 SRP
2 Players
Ages 11+
30 Minutes
In the Vilcamayu valley of the 1930s, two rival expeditions are seeking out the fabulous treasures of the Incans. In the heart of the Andes, archeologists, mercenaries, guides and guerrillas all hope to claim their share of glory or riches. But the dangers are many. At the hour at which the sun barely dissipates the morning mists, the jaguar watches, the storm builds and the enemy waits, awaiting the right moment to strike... It's a beautiful day for an adventure!
This is a game for two treasure hunters in ancient Inca ruins. You are both looking for the same relics. But first you put together your exploration team out of archaeologists and soldiers of fortune by drafting cards from the central pile.  During the game you can poach staff members off your adversary or salvage a staffer from deadly traps.  You do all this to meet the required conditions to find those rare treasures. And because they're rare you'd better not miss them
This card game by Christian Martinez manages to be quite simple, have a good tactical depth, and stick to a wonderful pulp feeling worthy of the best Indiana Jones adventure all at once! After dozens of games, you will still want to come back to it! 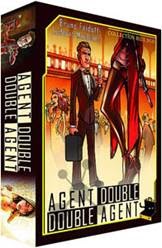 ASMDAG01US
Double Agent
$19.99 SRP
A dark conspiracy threatens civilization and every spy agency is on full alert! There is no way any of them will work together, though, as only the organization that has defeated the menace will get the rewards and glory. The loyalty of the agents sent on this mission only goes so far though... Will you be able to influence them enough for them to give you their precious documents?
Double Agent is a neat and quick game by Bruno Faidutti (Citadels,Tomahawk...) and Ludovic Maublanc (Dice Town, Cyclades...), which calls upon your deduction and bluffing skills, in a game that lasts about twenty minutes.  Double Agent is based on a simple idea : each player knows each agent's loyalty to him, but doesn't know his loyalty to his opponent. In such an ambiguous situation, it's hard to decide who you can trust with your precious top-secret documents, which must not end in enemy hands. Each player plays cards face down on his side of the gameboard. It is therefore a bluffing game, but it is also a deliberately chaotic and often uncontrollable game.
*No Image Available *
ASMJMA01US
Jungle
$19.99 SRP
It is said that the law of the jungle is that of the strongest... The lion, the imperious King, is feared by all animals. Tigers, panthers, and wolves flee his approach. Only the powerful elephant dares face him. But even the strong mastodon isn't safe from danger, and it's against the rat, the most modest of creatures, that he is the most vulnerable...
This subtle and refined game hails from China, where it is called Dou Shou Qi, the game of warrior animals. Its rules can be learned in a few moments and a game lasts about fifteen minutes. But only regular practice will allow you to master all of its subtleties. Just like the yin and the yang balance each other out, Jungle calls upon two opposite and complementary qualities: balance and movement. Will you be able to master these two paths to become the new master of the jungle?