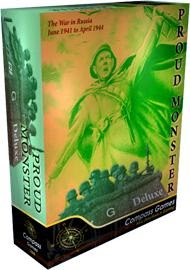 CPA1008
Proud Monster Deluxe: Russ-German War
$130.00 SRP
NPI
Proud Monster Deluxe is a simulation of the Russo-German War beginning with the launch of Operation Barbarossa in June of 1941, and ending in April of 1944. It is a two-player (or multi-player) strategic/operational wargame of low complexity.
Units in Proud Monster Deluxe are typically divisions with some corps, brigades and regiments also included. Hexes are 20 miles (about 33 kilometers) across, and each turn represents about a 2 week period. Game components have all been improved over the originals. All graphics have been completely updated and upgraded. Counters are 9/16" and map hexes have ample space to avoid players from knocking over those stacks of counters when the fighting starts to tighten up. The four (4) maps impress upon the players the enormous expanse of the Soviet Union and the challenge for both sides to defend and overcome it. Rules are consolidated from the two original sources into one comprehensive set, with all known errata folded in, and a number of important rule changes to improve game balance and playability.
In addition, the development of a definitive set of player aids will keep players playing the game instead of hunting down items in the rules. With four maps, over 2000 counters, player aids and rules, this is the playable monster for the East Front. It is your "Proud Destructive Monster!" 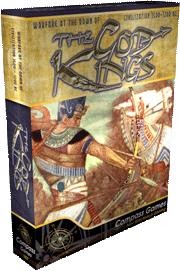 CPA1009
The God Kings: Dawn of Civilization
$65.00 SRP
NPI
The God Kings is a wargame covering the ancient wars of the Near East, from the 15th to the 13th century BC. Players control the armies of Egypt (New Kingdom), the Hittites, the Mitanni (a long-forgotten Hurrite kingdom), and the Babylonian Kassites. A resurgent Assyria also makes an appearance as raiding parties.
The God Kings is a card-driven game, a system modeled on Hannibal: Rome vs. Carthage. Each kingdom and its army is led by its King, and there are many Kings included, some great and some not so great... Ramesses II, The Pharaoh Queen Hatchepsut, Thutmosis III (the Napoleon of antiquity), Amenophis IV (better known as Akenathon), and of course Tutankhamon all appear for Egypt's greater Glory! Discover also Suppiluliuma, greatest of the Hittite kings, terror of his enemies, and Muwatalli II who would face and defeat the Egyptians at Kadesh.
The object of the game is to establish the greatest Empire of the time, dominating provinces that will pay the Empire tribute and provide you with timber, whilst defeating the armies of your neighbors and the Barbarians that always seem to appear at the worst possible times.
Playable by 2 to 4 players, with numerous scenarios - playing time from 15 minutes (Battle of Kadesh) up to 6 hours for the complete campaign. 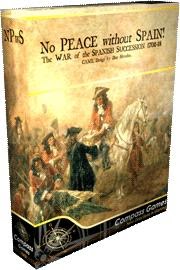 CPA1010
No Peace w/o Spain- Spanish Succession
$ 59.00 SRP
NPI
In November 1700, King Carlos II of Spain died without an heir. The long-standing feud between the Bourbons and Habsburgs erupted once again as both sides pressed their claim to the throne.
No Peace Without Spain is a two-player game that elegantly recreates this epic struggle using a point-to-point map and a single deck of 55 cards. Action cards are used to activate armies for movement and siege, while event cards bring historical and special events into play that can swing the tide of fortune when least expected. Each turn represents one year, each “corps” represents 10,000 men of all arms and each leader represents a major commander and his staff.
The game features an easy and intuitive battle system that highlights a unique aspect of this war – team-based battle command, perhaps the most famous example being the extraordinary success achieved by the partnership of two of the war’s most prominent commanders, the Duke of Marlborough and Prince Eugene of Savoy. The Bourbon cause has talented leaders as well, notably Marshals Villars, Vendome and Berwick. These and other leaders are rated for Tactical and Command capabilities and they significantly influence the course of events.
Posted by ACD Distribution at 5:56 PM